After the disappointments of recent seasons the bayreuther festspiele urgently needed to have a success. The year to date had been dominated by further episodes in the long-running saga of the Wagner clan and squabbles on the green hill. First, German media reports suggested that Katharina Wagner had managed to ban her co-director, her half-sister Eva Wagner-Pasquier, from the festspielhaus. Then, after Christian Thielemann lost out on the top job at the Berlin Philharmonic to his fellow Bayreuth conductor Kirill Petrenko, we learnt that Anja Kampe (reportedly close to Petrenko, and the Sieglinde in his Ring) had stepped down from singing the role of Isolde for Thielemann in this year\’s opening production. You really could not make it up.

It was time to try to focus on the music. After the furore that greeted her production of Die Meistersinger von Nürnberg in 2007, it was inevitable that Katharina Wagner\’s second outing as a director at the festival would occasion some apprehension. Would she inflame tempers even further? Or would she really shock people and go traditional? In the event she did neither: her Tristan und Isolde (July 25) was modern certainly, but ambitious and exhaustively argued on every level. At the end the production team put in only the briefest of appearances on stage, but they need not have worried about the reception. This was Bayreuth at its best in a performance that was well
sung by a first-rate cast and, as one expects at this address, beautifully played by the festival orchestra.

For an opera that is often performed on a more or less bare stage, the new Tristan set the technical staff some challenges. Wagner and her designers, Frank Philipp Schlössmann and Matthias Lippert, had devised settings that utilized every aspect of the Bayreuth stage. Each was a symbolic representation of the unattainability of true love. For the first act the stage was filled with staircases and moving platforms, creating a maze reminiscent of M.C. Escher through which Tristan and Isolde hopelessly tried to make contact. By the second act they had been thrown into a prison, where metal bars that seemed to offer a means of escape fell away at their touch. In the third act, the most spectacular, Tristan\’s visions of the Isolde he could never have as his own materialized through the darkness of the Bayreuth stage, some high up in triangles of light, others at ground level. Each of these lookalikes, both models and real people, slipped from his grasp in a different way, one tumbling to earth, another crumbling to dust, one losing her head, another spurting with blood, and so on. This was in the tradition of Bayreuth productions that have been memorable for their exceptional stagecraft-like the swimming Rhinemaidens or flying Valkyries in Peter Hall\’s otherwise unappreciated Ring.

On a human level the story of Tristan und Isolde can rarely have been told with such unrelieved pessimism. Katharina Wagner has no truck with her great-grandfather\’s magic potions and transfigurations. Everything was explained in realistic terms, so Tristan and Isolde were in love from the start and it was social and political opposition that kept them apart. Brangaene and Kurwenal fought to stop them meeting and an even more fearsome obstacle came in the form of King Marke\’s guards, clad in yellow uniforms emblazoned with black symbols like some modern-day SS brigade. When the time came to take the magic potion, this Tristan and Isolde joined hands and simply poured it away. Once incarcerated, they snatched time for a love duet in their prison cell, while hiding from the searchlights (Wagner\’s ‘tückische Tag\’) of King Marke\’s guards. And finally, after Isolde had sung the Liebestod over Tristan\’s body, King Marke seized her by the hand and dragged her away, his possession at last-a closing gesture that negated any last hope of emotional fulfilment like a punch in the stomach.

It was a production that played out as if Katharina Wagner was determined to prove it was not only her surname that had won her the job. This was my third Tristan und Isolde at Bayreuth and, although I would not prefer it to either of the other two-Jean-Pierre Ponnelle\’s beautifully-lit series of naturalistic tableaux or Heiner Müller\’s strangely atmospheric love story in abstraction-it made an emotionally bleak and powerful impact.

All this was told in a musical performance of high quality. The days when there were no Wagner tenors are happily over and Stephen Gould, singing with all the stamina and musicality that he displayed last year at Covent Garden, was an outstanding Tristan who sounded even better in Bayreuth\’s warm acoustic. The third of the Isoldes to be cast in this production, Evelyn Herlitzius was hardly less impressive. For all its slim tone her voice can summon real power and the music seems to well up through every sinew of her body, though she did turn vocally wild towards the end. There was admirable support from the rest of the cast, including the generously-voiced Brangaene of Christa Mayer, Iain Paterson\’s sympathetically-sung Kurwenal, and a King Marke of impressive vocal authority in Georg Zeppenfeld. His firmly focused, dark tone was well suited to the implacable King Marke of this production and he made every word tell.

Earlier in the year there was amusement when a notice appeared in the Festspielhaus car park reserving a space for ‘Music Director\’ Christian Thielemann before his new title was announced. Thielemann first conducted at Bayreuth in 2000 and his Wagner has arguably become the optimum standard there. This Tristan und Isolde, played with uninhibited fervour by the orchestra, was spacious and deeply textured, but also alive to the drama from first note to last. Whatever else changes at Bayreuth, Thielemann looks set to hold on to his parking space for a few years yet. 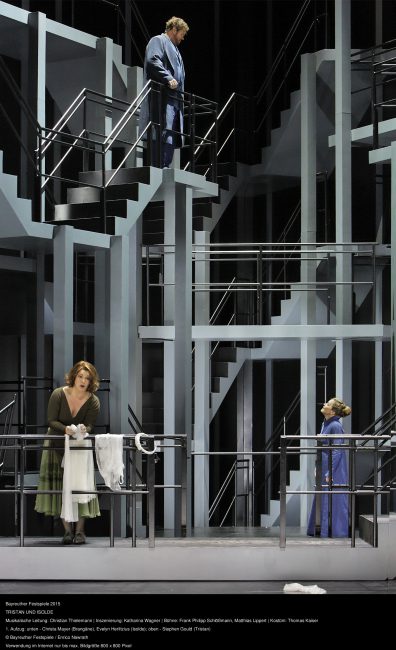