Francesca gets her gun

The deliberations on regime change at Glimmerglass Opera were apparently short and swift. In February last year the company announced that Michael MacLeod, its general and artistic director, would leave the company at the end of the 2010 summer season, after five years. Little more than two weeks later, Francesca Zambello, one of America’s busiest and most respected opera producers, was named his successor. ‘I was called in January and hired in February’, she says when we meet in her Manhattan apartment. Where MacLeod had relatively little prior experience with opera—he came to Glimmerglass after serving as executive director of the New Haven Symphony and managing John Eliot Gardiner’s Monteverdi Choir and Orchestras—Zambello has it in spades. Clearly the Glimmerglass Board of Directors is betting that her acumen and contacts will translate into a more consistent level of performance. Under MacLeod, Glimmerglass implemented innovative programming ideas but artistic standards were variable. It was disconcerting, for example, that in a season of Orpheus operas by Monteverdi, Gluck, Offenbach and Philip Glass, the production of the Glass stood out as musically and dramatically the most successful.

Zambello’s name had been batted around when the top job at the New York City Opera was open, so her decision to take an administrative position was not entirely surprising. ‘I had other offers, but this one seemed like a perfect match, because it’s a summer festival and has a legacy of things I believe in. I look forward to having artistic freedom and not being answerable on artistic matters to other people.’ Not that she envisages a drastic cutback in her other activities. She has a lot on her plate. She recently directed Carmen in Beijing; June brings the first integral performances of her Ring cycle for the San Francisco Opera; she returns to the company to direct the premiere of Christopher Theofanidis’s opera Heart of a Soldier in September. The day after we met she flew to Zurich to discuss plans for a musical. A new production of La traviata at the Bolshoy Theatre is also on the horizon.

‘I expect to be on site about four months a year and, fortunately, I will have the help of Linda Jackson, our new managing director. A large part of the job is artistic planning and fundraising, and you can do that anywhere.’ Indeed, she has already done so, having by her reckoning shrunk by a half the $2.3 million deficit at Glimmerglass, which has a budget of $6 million. And, contrary to the practice of scheduling years in advance, she insisted on planning her first season. ‘It’s important to make a mark right away.’

Accordingly, in June 2010 Glimmerglass announced a four-production season for 2011 consisting of Cherubini’s Médée, Carmen, a double bill of John Musto’s Later the Same Evening and the premiere of Jeanine Tesori’s A Blizzard in Marblehead Neck, and Irving Berlin’s Annie Get Your Gun. Zambello points out that four centuries are represented, but it is certainly not a season that would be unimaginable under the previous management. It draws on familiar and unfamiliar works: the double bill continues the company’s commitment to presenting new work; and there is a precedent—Kiss Me, Kate! in 2008—for staging a vintage musical comedy.

Yet Zambello insists that she will not be bound by the unwritten guidelines that tend to limit the nature of repertoire at Glimmerglass and, for that matter, other summertime American festivals. There are exceptions, of course, but generally speaking, Mozart is in, Wagner is out and Verdi is treated judiciously. Anything too large in scale or too demanding of performing resources tends to be shied away from. ‘We will do a different kind of programming which will promote innovative products. We want to appeal to both the cognoscenti and the first-time opera-goer. I plan on being an advocate for the art form and speaking with the passion of an artist. Balance and diversity is crucial. And we’re not just going to do delicate little things.’ Sometimes it seems that Americans have become so accustomed to large opera houses that they believe there are works that are too big for a 900-seat house like Glimmerglass’s. It’s an idea Zambello flatly rejects. ‘Wagner wrote for small houses,’ she points out. ‘Our theatre is fabulous. “Bayreuth marries a barn”—that was the inspiration for its design in the 1980s. HD streamings can’t do what we do.’ As the 2013 anniversary year of Wagner and Verdi approaches, she is getting ready to mark the occasion. In its 35-year history, Glimmerglass has given only one Wagner opera (the early comedy Das Liebesverbot in a trimmed-down version) and only three Verdi operas (Rigoletto, La traviata and Falstaff). ‘I can tell you we will have big-scale works for 2012 and 2013.’ She also has her eye on the French Baroque and Kurt Weill, among other niches of the repertoire.

Annie Get Your Gun will not be a one-off event but the start of an ongoing tradition of producing classic American musicals. ‘We will do them the way they were meant to be done—with big voices, no miking, full orchestra and ensemble—come scritto, in a way.’ Deborah Voigt will be Annie. ‘She is our artist in residence this year and will work hands-on with our young singers. She will also star in a new one-woman show called Voigt Lessons, created by her, Terrence McNally [the playwright] and me. The music will run from Karen Carpenter to Strauss.’ Might the musical slot also accommodate Gilbert and Sullivan in future seasons? Zambello rolls her eyes and says she is not a fan, but the Savoyards have held a firm place in Glimmerglass’s repertoire and many would be loath to see them lose it. 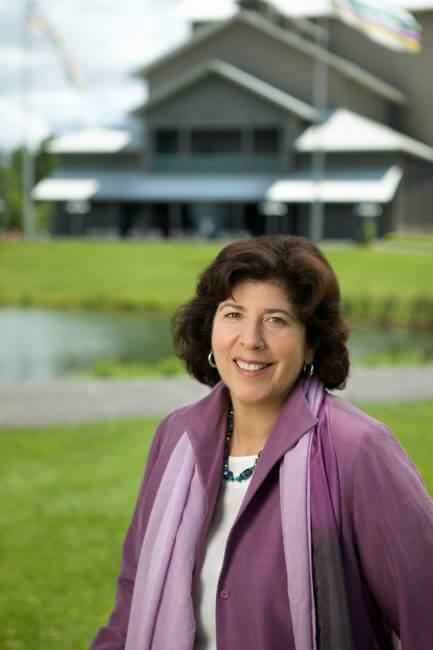