A burst of star power dominated san francisco opera\’s final fall production. On November 10 Karita Mattila met Emilia Marty for the first time in her career in a new production of Janáèek\’s Makropoulos Case, to be shared with the Finnish National Opera, where it goes next year. The soprano brought unambiguous glamour and a searing dramatic intelligence that brilliantly restored the work to the San Francisco repertory after a 17-year absence and afforded the company an unambiguous hit.

Doubtless the Finnish artist will refine her interpretation of the weary, 337-year-old diva as she introduces her impersonation to international houses. But even here, Mattila delivered a rounded portrait of a character who is slowly corroding from within; in a sense, she is dead before the opera begins. This Marty is glacial, flirtatious, volatile, shockingly candid and irrepressibly physical. When the possibility of ending an arid existence arises, the decision is supremely logical and the major-key transformation is luminous. A few patchy attacks aside, Mattila\’s voice rises to every occasion with disarming potency and myriad colours.

Taking its cue from the soprano\’s interpretation, Olivier Tambosi\’s admirable production treats the opera not as dour allegory but as absurdist comedy. To remind us of the work\’s message about mortality, an omnipresent wall clock registers real time. Tambosi missteps only once: it should be the budding soprano Krista who burns the formula, thus restoring the balance of the world. By moving the story to the mid 20th century the producer allows his diva to sheath herself in Chanel and Givenchy knock-offs and occasionally unsheathe herself, too. A Pierrot costume may be too close to Lulu for comfort. Dominating Frank Philipp Schlössmann\’s spare decor are curved grey cross-hatched walls which, in their mobility, threaten to envelop the performers in Marty\’s destiny.

Tambosi reveals a sure hand at characterization, thus sustaining interest during the expository first act. Miroslav Dvorsky\’s ardent tenor made Albert Gregor\’s infatuation with Marty (a distant ancestor) credibly poignant. Gerd Grochowski\’s bass-baritone yielded a wily Jaroslav Prus. Thomas Glenn\’s light tenor contributed a fussy Vitek. Susannah Biller, a company Adler fellow, impressed as Kristina. Most winning of all was Matthew O\’Neill\’s dotty but ever-libidinous Hauk-Šendorf, a lover of the protagonist in one of her earlier guises.

One company debut and a major one: in the pit, Jiøí Bìlohlávek affirmed his credentials as a sophisticated and compassionate Janáèek specialist. He tore into the turbulent prelude, allowing the opera\’s compressed, speech-driven themes to collide with each other and throughout relished the composer\’s uniquely angular lyricism. The production was dedicated to the memory of Charles Mackerras, the company\’s erstwhile principal guest conductor and the leading Janáèek advocate of his day. Bìlohlávek, on the evidence here, has assumed Mackerras\’s mantle. 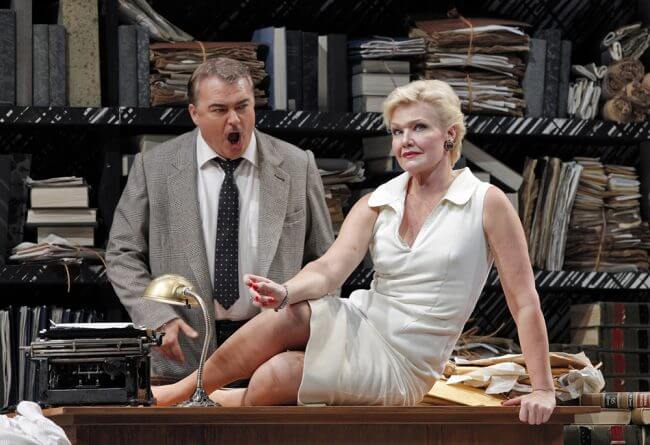