In 1968 RCA released ‘Shirley Verrett in Opera\’, a mix of French and Italian repertoire, much of it unfamiliar and all of it gloriously sung. The disc opened with the heroic bravura aria of Gluck\’s Orphée (in the version reworked by Berlioz for Viardot). Here was a mezzo who could effortlessly deploy a distinctively rich timbre across two-and-a-half octaves, while revelling in the fearsomely difficult coloratura and digging intensely into the text. That bold performance typified Verrett throughout her career.

Like all great operatic artists, Verrett projected character so specifically that a single phrase could achieve a powerful impact. How could Manrico ignore the deadly seriousness of this Azucena\’s ‘Son io che parlo a te\’? And the mightiest Samson was helpless before Verrett\’s Dalila, who breathed mesmerizing sensuality into her initial utterance of ‘Réponds à ma tendresse\’. Possessing stunning personal beauty and innately regal stage presence, Verrett embodied noblewomen-whether Didon, Elisabetta, Eboli or Amneris-through a remarkable mingling of vocal prowess, interpretative intelligence, and masterful control of posture and gesture.

Born in New Orleans on 31 May 1931, she did her first public singing as a child in church. Fed up with segregation, her father moved the family to southern California, where his daughter\’s vocal potential was revealed in competitions. The baritone John Charles Thomas offered sponsorship for lessons with Lotte Lehmann, but the teenage Verrett felt unready and declined. She eventually earned an estate agent\’s licence and also-at 20-entered into an unsuccessful first marriage in 1951.

A 1961 Metropolitan Opera National Council Auditions winner, Verrett participated in the inaugural concert of Philharmonic (now Avery Fisher) Hall and the first of Bernstein\’s Young People\’s Concerts to be telecast from Lincoln Center. Stokowski, who had wanted Verrett for Gurrelieder in Houston (the orchestra\’s board of directors refused to accept an African-American soloist), invited her to sing and record El amor brujo with him and the Philadelphia Orchestra.

The young mezzo\’s Carmen was heard at the Spoleto Festival, the Bolshoy, La Scala, her return to New York City Opera, and her 1968 Met debut. Verrett\’s first Covent Garden appearance, Ulrica in 1966, was followed by Eboli, arguably her finest achievement in Verdi (it created a sensation in her 1970 Vienna Staatsoper debut). She returned periodically to the ROH until 1983, singing Azucena, Amneris, Orfeo, Carmen, Norma, Tosca and Dalila.
Verrett shone to spectacular advantage in certain dramatic roles available to both sopranos and high mezzos: Maria Stuarda\’s Elisabetta (onstage in Milan and Florence, in concert in New York and London), Selika in L\’Africaine (San Francisco), and the leading ladies of Les Troyens. After first singing Didon for RAI, she was both Cassandre and Didon (the latter replacing Christa Ludwig) on the opening night of the Met\’s first Troyens.

That 1973 tour de force brought the singer new interest from the management at the Met. She sang there as a mezzo (Eboli, Azucena, Amneris, Carmen, Neocle, Dalila, the Favorita Leonora); a ‘Zwischenfach\’ singer (the Troyens heroines, Adalgisa, Bartók\’s Judith); and a soprano, performing several roles in that category that probably took even her most devoted fans by surprise.

Verrett\’s exploration of the soprano repertoire had begun auspiciously in 1975 with Macbeth for Abbado and Strehler at La Scala, but her return for the Ballo Amelia two years later was less successful. At the Met, Mme Lidoine in the company\’s first Carmélites suited her, but listeners differed widely regarding Norma, Tosca and Leonore (Verrett\’s 2003 autobiography revealed that her Fidelio performances were undermined by serious health problems brought on by the menopause). Although she sang Lady Macbeth at the Met in 1988, the last of her 126 performances there were in mezzo parts-Dalila and Azucena, both in 1990.

Of numerous Verrett admirers perplexed by her assumption of soprano roles, one remembers especially Walter Legge. He wrote, ‘I wish Verrett would listen to plain common sense. She is by achievement the best mezzo in the world. She should be forbidden to sing Norma … I adore her as an artist, her application, natural acting ability, lovely velvety timbre, agility and brilliance. These particular qualities are so rare in one beautiful young woman that someone should lay down the law.\’

Legge\’s concern was not unfounded, in that the soprano repertoire tended to accentuate the register break in Verrett\’s voice and promote a brighter, shallower sound. While her flexibility remained hugely impressive, the upper extension never acquired the expansiveness and tonal lustre for most of the soprano parts she undertook. Listening to Verrett on YouTube singing Dalila in 1981, one notes that the velvet has returned, thanks to the comfort of a lower tessitura.

Verrett\’s soprano repertoire was embraced by companies besides the Met-above all, the Opera Company of Boston (Aida, Tosca, Norma, Desdemona) and the Opéra National de Paris (Alceste, Médée, the Tauride Iphigénie). In 1990 Verrett inaugurated the Bastille as Didon. The Cassandre was Grace Bumbry, her partner for a 1982 Carnegie Hall concert celebrating Marian Anderson\’s 80th birthday.

In 1994 Verrett appeared on Broadway, portraying Nettie in Nicholas Hytner\’s production of Carousel. (She paraphrased that role\’s inspirational solo number in entitling her autobiography I Never Walked Alone.) Five years later she returned to New York to star off-Broadway in the 1903 musical In Dahomey.

Documentation of Verrett\’s art includes 12 studio recordings of complete operas. Other than Orfeo and Jocasta, these cover bel canto and Verdi roles (most outstandingly Eboli, with Giulini conducting). There are concert works of Vivaldi, Beethoven, Mendelssohn, Rossini, Brahms, Mahler and de Falla, as well as a Carnegie Hall recital, several other solo discs, and opera duets with Caballé. Among live performances privately released, particularly noteworthy is a magnificent Elisabetta from La Scala. On DVD are Verrett\’s Lady Macbeth (in the director Claude d\’Anna\’s 1987 film), Selika, Dalila, Santuzza and Tosca.

From 1996 until her retirement in 2010, Verrett taught at the University of Michigan in Ann Arbor. The countertenor David Daniels, who had studied there, first met Verrett when he returned for a recital. During subsequent visits, he would invariably drop by her studio for an hour or two. ‘The students at that time had no idea of who this woman was and the stature she had in the business. We\’d talk about her career, her recordings, and she\’d tell stories about everybody she\’d sung with. She couldn\’t have been lovelier or more generous to me. She was completely classy-in her look, the way she carried herself, and the way she sang.\’ 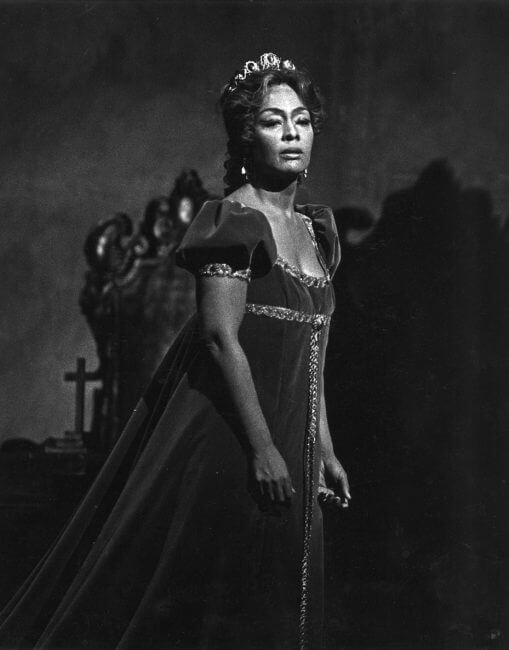