It took six years to accomplish, but the Bolshoy Theatre’s comprehensive renovation was all but complete when the theatre reopened with a gala evening of excerpts on October 28. (Soundproofing against noise from the underground Metro continued through November.) Any objective observer would say the place looks great. It ought to—the renovations not only took longer than those of any other opera house in living memory but the price tag was higher. The 21-billion-rouble cost (£433 million; $682 million) vastly exceeded original estimates, though it came in well under the $1 billion figure once feared. (An investigation by the state prosecutor’s office into misapplication of funds continues.) The upgrades range from the purely functional to fine points of detail: from a new foundation supported by pilings designed to prevent the theatre from sinking into a subterranean river, to silk wall panels painstakingly reworked to repair damage caused when royal symbols were cut out.

The guiding principle was to make the theatre look as it did in 1856, when, after a fire, it was rebuilt according to plans by Alberto Cavos. A Bolshoy principal dancer, Nikolay Tsiskaridze, apparently concluded the goal was not reached. He said on Russian television, ‘You have the feeling you are in a Turkish hotel built in the shape of the Bolshoy.’ There were also allegations that cheap building materials were used, although according to a 120-page book documenting the renovation, the auditorium required 4.5 kilograms of gold—2,812 sheets of gold leaf. Some complain that the gold leaf in the auditorium is now too bright. (People said the same thing after La Fenice was rebuilt, but my recollection of that is of a rather dingy theatre before its disastrous fire.) As one who clearly remembers the Bolshoy’s pre-renovation appearance, I found it heartening to see it literally sparkle.

The main curtain, made in Italy, looks like the old one, with its familiar rich design in red and gold. But don’t expect to find a hammer and sickle. In a reversal of action during Soviet times, Communist symbols were assiduously removed. Also during Soviet times, the seating capacity was increased to more than 2,100 by using smaller chairs; now it is back to 1,750. Among the changes unnoticed by spectators are a doubling of backstage space, achieved largely by creating floors underground, and a substantial enlargement of the stage itself. There is a new underground multi-purpose space that can be used as a 350-seat concert hall, a new organ and state-of-the-art technical equipment. Oddly, one must now traipse up (albeit in new lifts) to the very top for food and drink, though I spotted one bar tucked away on a lower level.

The first new production in the renovated theatre, Ruslan and Lyudmila in a staging by Dmitri Tcherniakov (seen on November 5), made no obvious use of the new technical equipment; but that wasn’t what audiences and critics found to complain about. Glinka’s opera holds a special place in the heart of Russian audiences—not only is it based on Pushkin (as are so many Russian operas) but its story is a fairy tale known to every Russian child. The opera is cherished family entertainment. Add in the fact that Russians regard it as the first true ‘Russian’ opera, and you have a work that is virtually sacrosanct.

Accordingly, it did not sit well with many that Act 3, in which slave girls bewitched by the evil sorceress Naina attempt to distract Ruslan from finding his abducted bride Lyudmila, was set in a bordello (albeit a tastefully homey one, in Tcherniakov’s decor). The girls also performed the Act 3 ballet sequence, which included a Charlie Chaplin imitation, juggling routines and a finale on roller skates—not Bolshoy classical ballet fare. A later scene included fleeting nudity. The production also had a clumsy Konzept in which the ordeal undergone by the central couple was masterminded by Naina and the ‘good’ sorcerer Finn to resolve their dispute about whether true love exists. During scene changes, tedious silent videos showing the faces of the two singers were projected. These provoked catcalls, including calls of ‘Shame!’, ‘Out of the Bolshoy’ and ‘Enough!’. No one could remember a Bolshoy audience expressing such vocal disapproval before now, although Tcherniakov’s Onegin for the Bolshoy’s New Stage did create a rumpus in 2006.

Here he showed an appreciation of the grandeur of the occasion, at least in one respect. The curtain went up on as opulent a representation of Ruslan and Lyudmila’s wedding festivities as could be hoped for—a veritable challenge to the new splendour of the theatre itself. Principals and wedding guests sat at tables in ornate traditional costumes (by Elena Zaitseva), all aglow in Gleb Filshtinsky’s lighting. It turned out to be an elaborate ‘costume’ wedding, modern, but with a Ruslan theme. This became clear after Lyudmila was abducted and the action shifted to the present. Yet despite the puzzlements that typically attend Tcherniakov productions, this was an engaging and satisfying Ruslan that never strayed far from the opera’s essential spirit. The Act 4 scene of Lyudmila’s captivity was especially good. Housed in a bedroom that exuded both luxury and institutional sterility, Lyudmila had everything she could ask for, except her freedom—manicures, massages and fine cuisine, judging from the amusing dance of chefs in the ballet sequence. Yet you sensed her longing as she watched a pair of lovers through a picture window. According to a Russian colleague, the production was toned down after the first night, when a bare-chested masseur dropped his towel as he gave Lyudmila a massage. 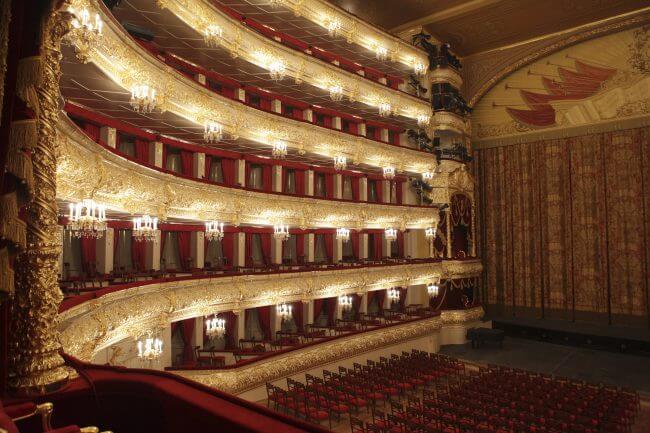