Welcome to our Opera Asiatica issue, with a bumper crop of features looking at the art form across Asia—our contribution to October 25’s first World Opera Day.

Lü Jia is the music director of the National Centre for the Performing Arts in Beijing and he made time in his busy schedule to pause between rehearsals in Macau and talk to Ken Smith.

Western opera has taken root and flourished in Chinese soil but alongside that China is creating a growing popular repertoire of new work, as discovered by You Weizhi.

With Korean singers featuring in performances in Italy, Germany, the US and the UK, Yongsook Lee investigates the success Korea has had in producing excellent voices and well prepared orchestras.

Bradley Winterton looks at the growing popularity of opera in Vietnam, staged in the country’s three historic theatres, in Hanoi, Haiphong and Saigon.

Ever since Amartuvshin Enkhbat reached the finals of the BBC Cardiff Singer of the World in 2015 as Mongolia’s first ever entrant to the competition, audiences have been fascinated by singers from that country. Kate Molleson goes in search of Mongolian operatic talent and finds a plentiful supply.

David Chandler looks at the history of opera in Japan, and the steady increase in international collaborations.

The soprano Ying Fang, born in Ningbo, China, made her Salzburg Festival debut this summer as Ilia in Idomeneo . Here she talks to Joanna C. Lee.

The composer Unsuk Chin, born in Seoul and now based in Berlin, chooses Tristan und Isolde conducted by Carlos Kleiber as her favourite recording.

We have reviews of new productions in including Tannhäuser at Bayreuth; Capriccio in Madrid; Il barbiere di Siviglia in Savonlinna; King Roger in Frankfurt; Anna Bolena , Madama Butterfly and the premiere of Elena Kats-Chernin’s Whiteley in Sydney; Barbe-bleue in Lyon; Salome and Agrippina in Munich and a rain-beset Rigoletto in Bregenz. Opera Holland Park finished the season with an opera that has almost become a signature piece, Cilea’s L’Arlesiana , and a double bill of Il segreto di Susanna and Iolanta .

Our disc of the month is Goldschmidt’s Beatrice Cenci , from the 2018 Bregenz Festival, with Gal James as Beatrice, Dshamilja Kaiser as Lucrezia and Christoph Pohl as Francesco Cenci, with the Wiener Symphoniker conducted by Johannes Debus, in a production directed by Johannes Erath and designed by Katrin Connan and Katharina Tasch (C Major DVD). 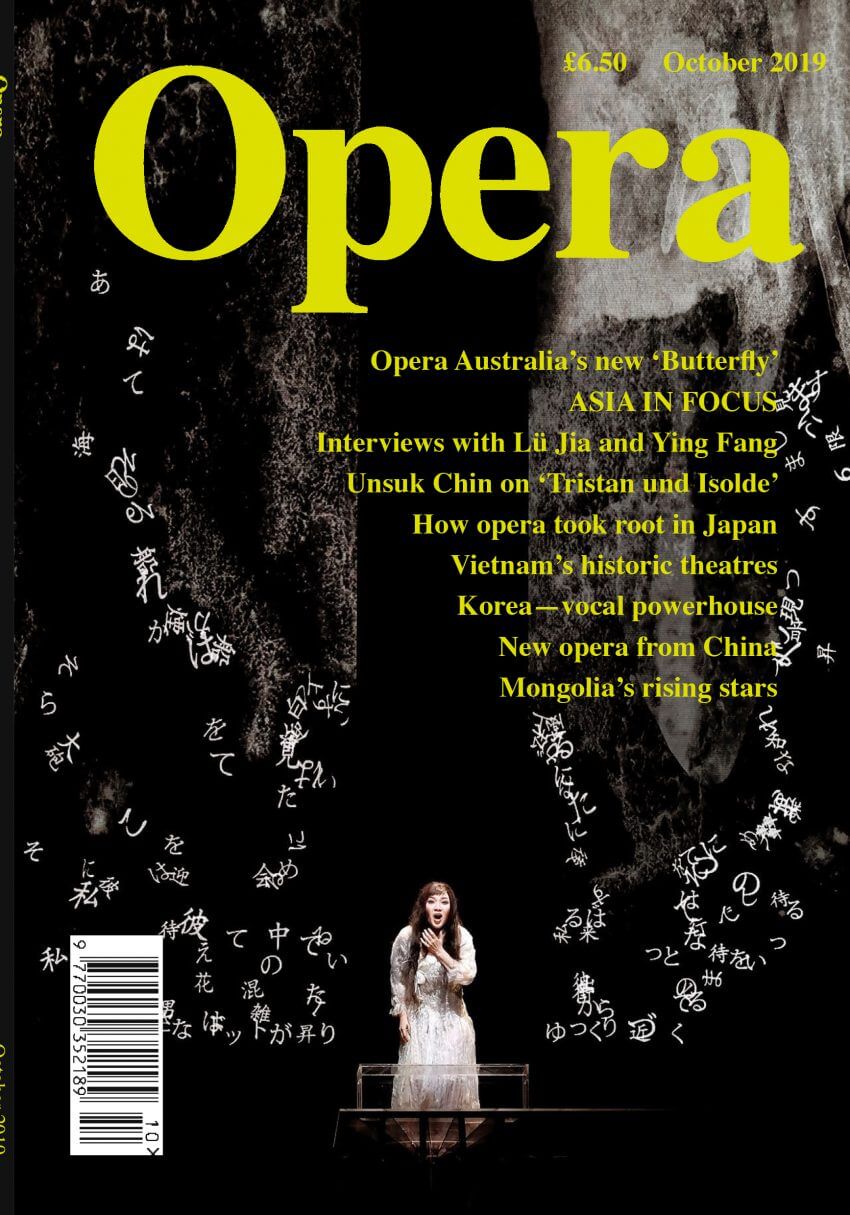