Live staged opera returns to our cover this month, which shows the soprano Aušrinė Stundytė as Elektra at the centennial Salzburg Festival, one of several events we review inside the magazine as we chart opera’s steps back into performance.

There’s a soprano theme running through the features, with a ‘People’ profile of the scintillating Lisette Oropesa, who herself has enjoyed being back on stage since end of the lockdown. We also salute Josephine Barstow’s 80th birthday by revisiting her thoughts on singing Violetta, and we mark the bicentenary of Jenny Lind’s birth — the ‘Swedish nightingale’ is recalled mostly through her own words. Ermonela Jaho appears in our ‘For the record’ column, where she chooses Maria Callas’s recording of Madama Butterfly under Herbert von Karajan.

Also included in this month’s features:

—The cost of singing: an analysis of the economic realities of being on stage

—Masks (of the non-PPE variety) in opera

—Songs of love and death: opera’s transformation under a previous plague

Our ‘Disc of the month’ is Massenet’s Thaïs, with Erin Wall in the title role, conducted by Andrew Davis (Chandos). 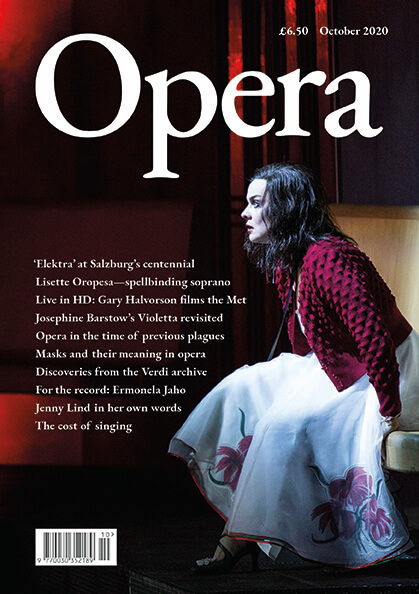