We celebrate the life and work of Harrison Birtwistle with a tribute by Andrew Clements.

Federica Lombardi talks to Hugh Canning as she moves from Mozart to Verdi, with performances as Amelia in Simon Boccanegra coming up in Liège.

In our Great Singers in Great Roles series, Willard White remembers taking on the role of Porgy in Gershwin’s Porgy and Bess, one which he went on to perform many times, and to record and film. 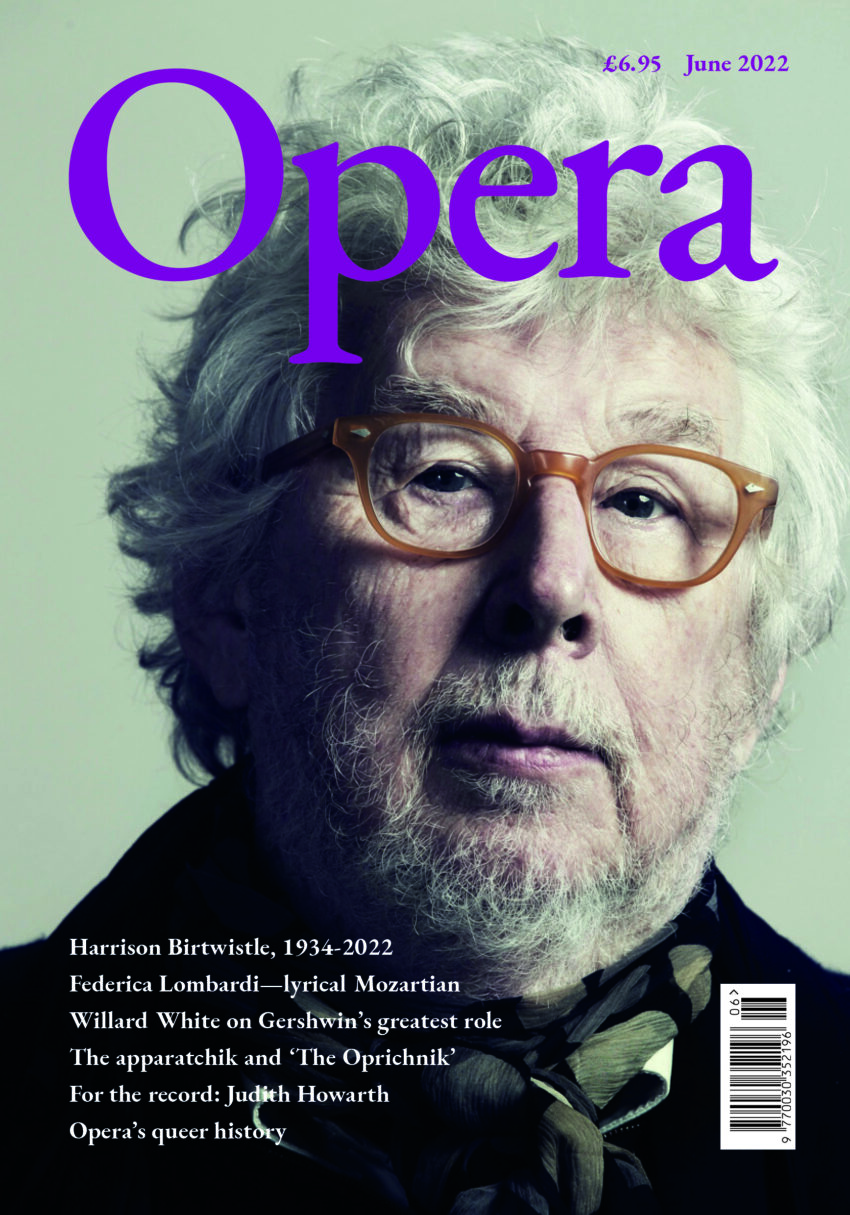 Wishing the soprano - and CEO of ⁦@BYOpera⁩ - ⁦@Anna_Patalong⁩ a very happy birthday!

Sad news of the death yesterday of the Uruguayan soprano Silvia Baleani, aged 80.

Un bel dì: Rosina Storchio, the first Madama Butterfly and also the creator of roles in operas by Giordano, Leoncavallo and Mascagni, was born in Venice #OTD in 1876.

Still keeping time … Ravel's L'Heure espagnole was premiered at the ⁦@Opera_Comique⁩ in Paris #OTD in 1911.

Sad news of the death of the Romanian mezzo Mariana Cioromila, at the age of 70.

Welcome to OPERA, the world’s leading magazine about the art form. Founded by opera-lovers back in 1950, and proudly independent ever since, OPERA has an unrivalled, trusted network of writers in every corner of the globe.

In our current issue you will find all the features, interviews, reviews, news, gossip, recommendations and listings you need to keep you up to date with the ever-changing opera world; our online archive, available free to every subscriber, is a treasure trove of reporting and opinion spanning more than seven decades.

Whether you are a seasoned industry professional, a dedicated opera-goer or an armchair opera fan, you will find something in our pages that’s for you.

In 2012 Opera was the co-founder of the International Opera Awards, and we have continued as a partner ever since. Each year the magazine assembles an impressive international jury spanning several continents, chaired by the Editor, to select the shortlists and vote on the winners, who are announced at a ceremony in London.

Winners of the Readers’ Award, voted for by you, have included Sonya Yoncheva, Pretty Yende, Juan Diego Flórez, Ermonela Jaho, Jonas Kaufmann and Joseph Calleja. As well as fulfilling the initial aims of raising the art form’s profile worldwide and recognizing achievement in all opera’s many disciplines, the Awards have also supported hundreds of singers and opera creators through the Opera Awards Foundation bursaries. 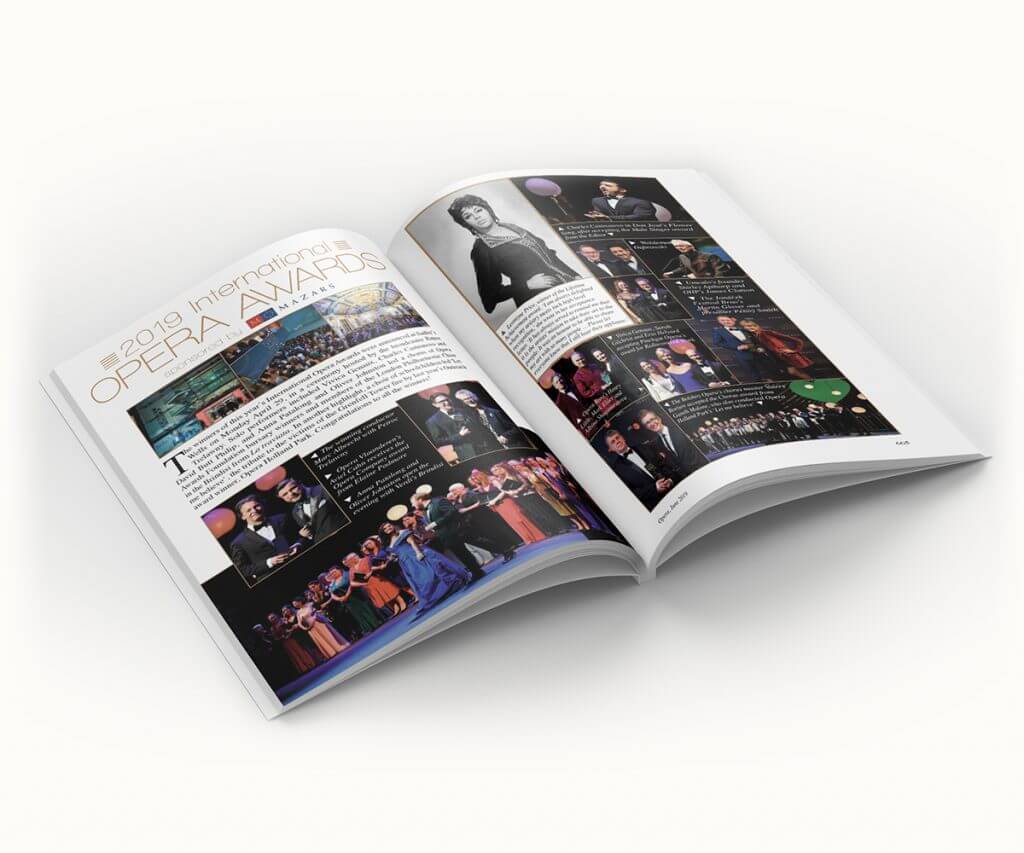 The Opera Awards Foundation was created in 2012 by Harry Hyman, who recognized that there were many artistically talented individuals whose potential was not being nurtured to development.

The Foundation awards annual bursaries to aspiring operatic talent. There are no restrictions on age or nationality, nor is support limited to singers: applications are encouraged from any artist working toward a career in opera, who needs financial support to achieve their career goals. 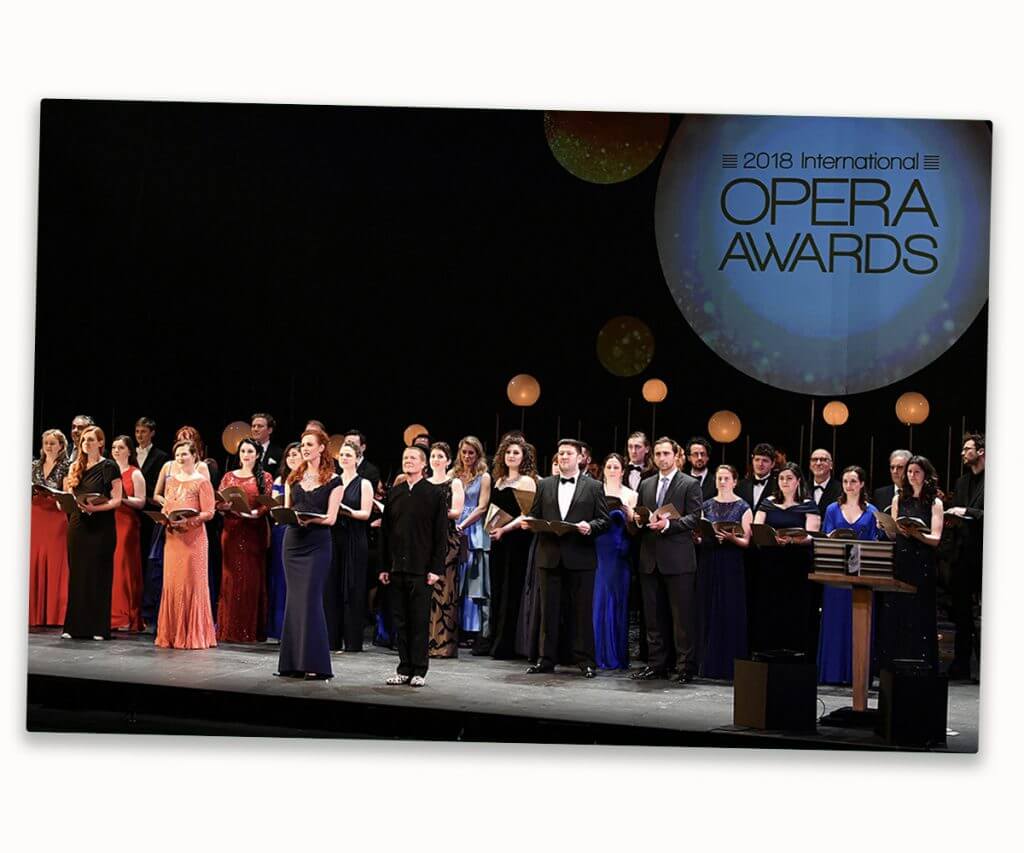 OPERA is continuing to publish on schedule every month during the coronavirus crisis, bringing you the latest news and ideas from those who are continuing to keep the art form alive even while opera houses have had to shut their doors.

The range of topics in our expanded features section each month will offer both engagement with the crisis and a means of escape; meanwhile, our CD, DVD and book reviews carry on as normal.

“The magazine has ceased to be a luxury and is now a lifeline.”
SB, subscriber 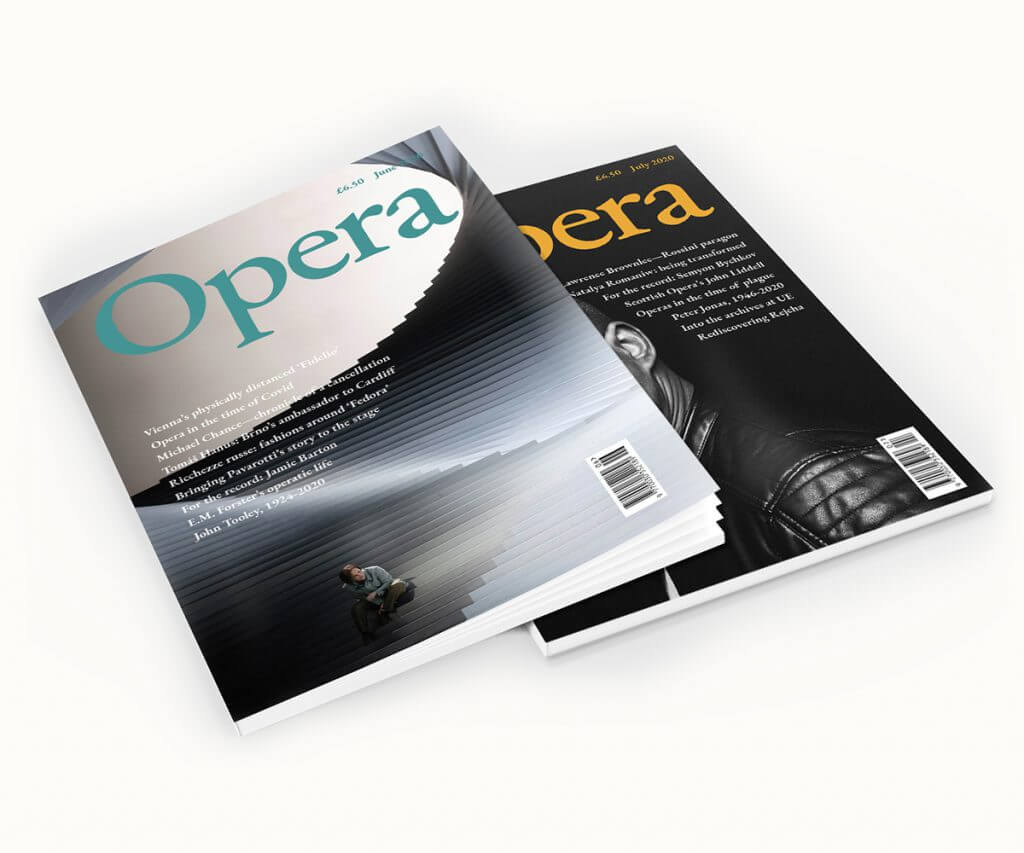 Opera is the leading magazine in the operatic world. We are based in London, but around half of our readership is outside the UK, and we aim to provide the most widespread coverage of the opera world that we can. At our last count we had readers in at least 65 countries. Our team of correspondents reflects this, being located across six continents. In 2019 we carried reviews from well over 200 different cities and towns, in 46 countries. We don’t believe any other magazine comes close. 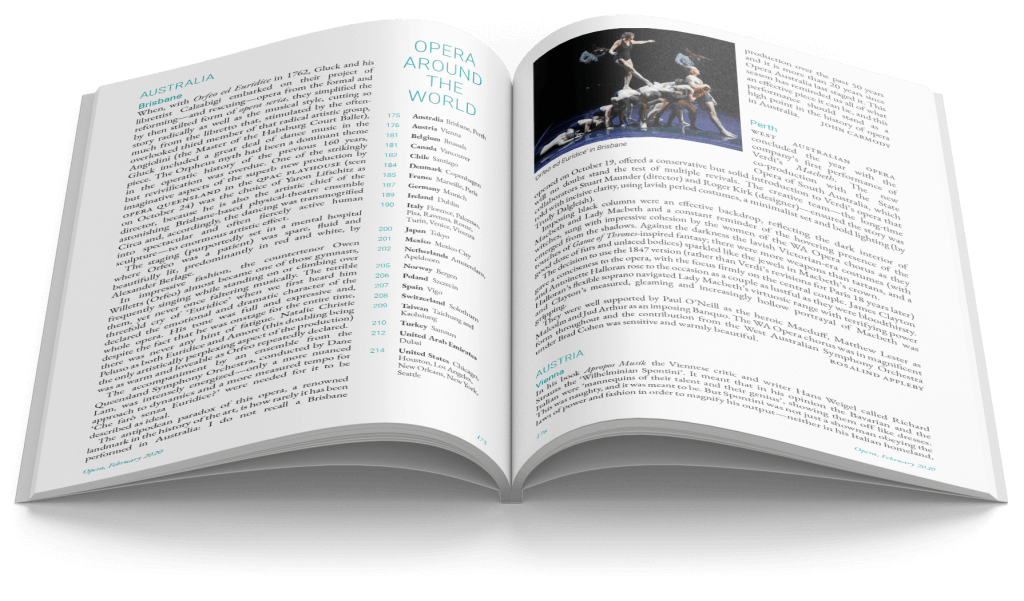 “Obviously, I am going to be a very big fan of any magazine so in love with opera, and I am proud to say that I have read OPERA magazine for many years. This small and beautiful magazine is one of the true authorities of the opera world.”

Over 70 years of archive issues

Our digital edition of Opera magazine is delivered by Exact Editions, it is available on iPad, iPhone and Android tablet and phones. 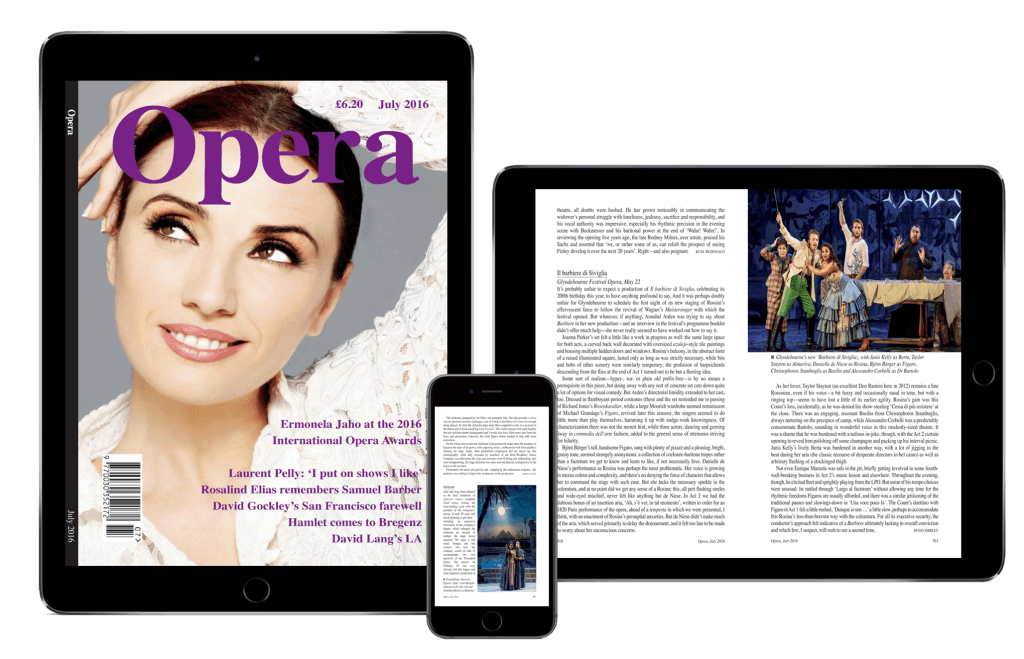 “OPERA gives the best overview of the opera scene, with good production pictures as well, AND I can keep track of my British friends and what they’re up to!”

Paid print subscriptions include FREE digital access across all platforms… 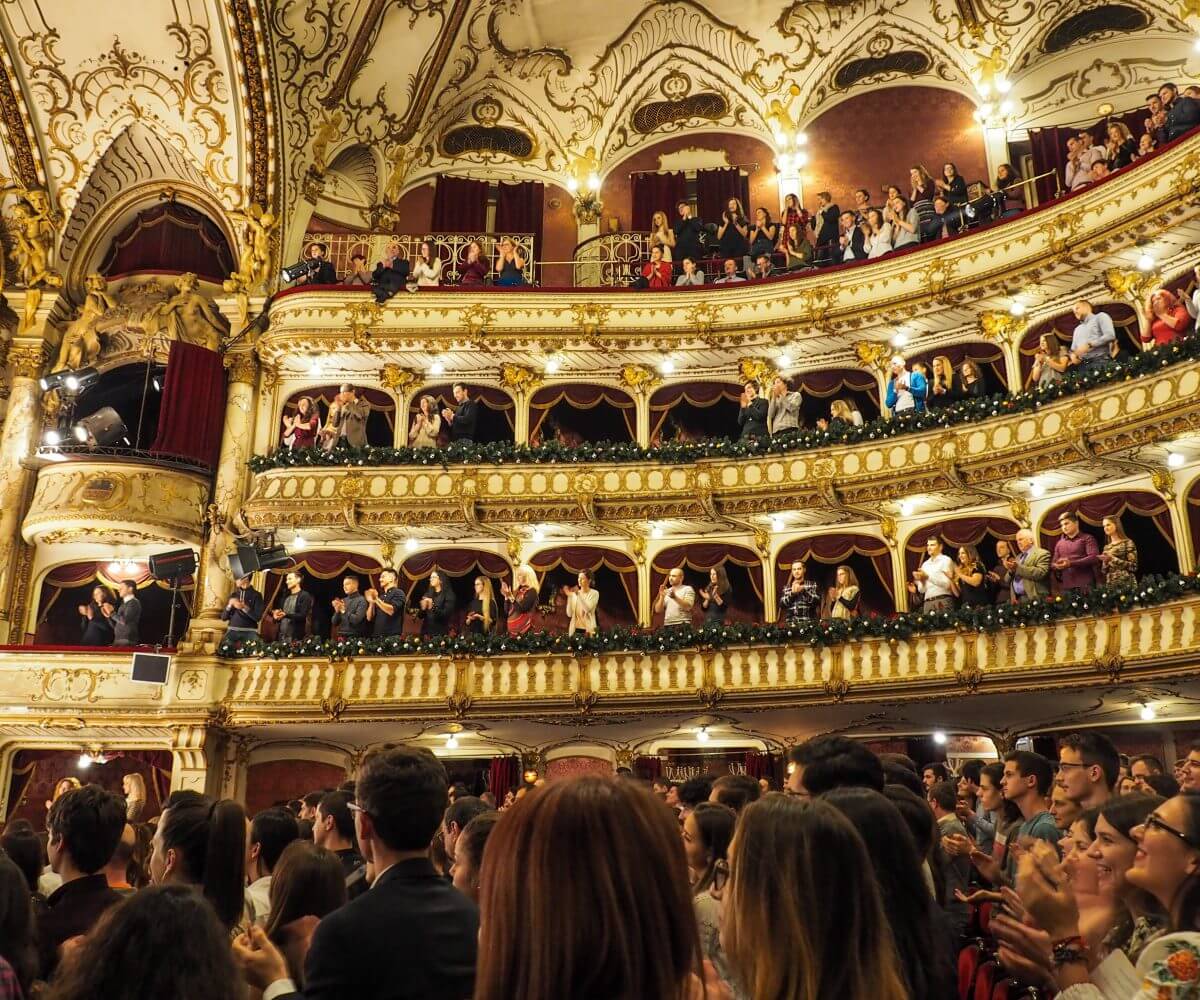 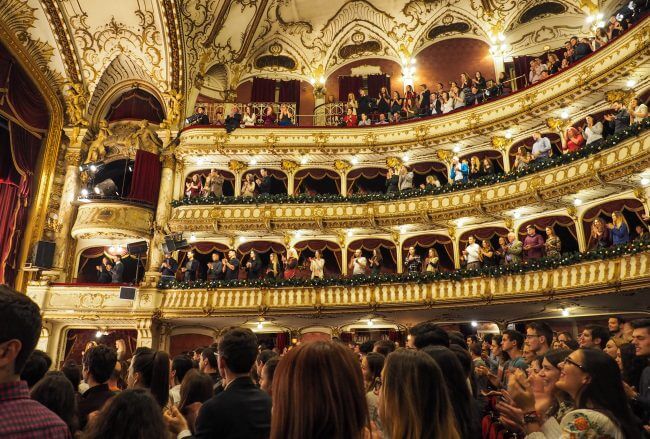