Despite Krzysztof Warlikowski\’s quirky production, this Lulu is irresistible because of Barbara Hannigan\’s performance of the title role, one as sexy as it is vocally incandescent. The bell-like sparkle of her voice serves both the music and the character to perfection, while her way with words has its own potency in Lulu\’s arsenal for seduction. As effective as her kittenish innocence proves to be in enslaving men, she knows how to break out of that mould with searing displays of passion, as when singing of her love for Dr Schön midway through Act 1. And then there are her legs, not infrequently seen wrapped around men or spread apart for simulated oral sex. She spends much time sprawled out on a leather-cushioned stretcher, often wearing a skimpy bra and panties. And regardless of which of several wigs she sports, she always looks enticing. Hannigan is so effective a man-eater that her descent into prostitution almost seems a temporary setback that will eventually right itself.

Among the talents Hannigan demonstrates here are those of a ballet dancer, which presumably accounts for the ballet incidents Warlikowski has grafted on to the action. These include the presence of young dance students, who intermittently watch the sordid goings-on with keen interest, and a
prima ballerina, who seems to function as a Lulu double and, in one of three time-wasting episodes from the self-indulgent Warlikowski, performs a frenzied Totentanz ohne Musik after
Act 2 which lasts nearly five minutes. Warlikowski also introduces creepy figures in black reminiscent of old monster movies. More satisfactory is his use of a glassed-in area in which offstage events can be enacted, such as the Painter\’s suicide. More important, his direction does not undermine Hannigan\’s performance and indeed may have enhanced it; one can be grateful that the camera focuses on it rather than on extraneous events elsewhere. Małgorzata Szczęśniak\’s single set, dominated by an art-deco staircase with sloping wooden sides, isn\’t much, but her costumes for Lulu accentuate her sensuality.

Dietrich Henschel is not the ‘heroic baritone\’ Berg specified for Dr Schön, but he sings intelligently, and affectingly charts the prominent man\’s undoing. Charles Workman is a fine Alwa, all too eager to fall under Lulu\’s domination, and Natascha Petrinsky\’s richly-sung Geschwitz is a plausible candidate should Lulu look to females for companionship. Pavlo Hunka, singing robustly, is a relatively youthful Schigolch, while Tom Randle, Ivan Ludlow and Rúni Brattaberg make marks in multiple roles. Paul Daniel\’s conducting stresses clarity without dampening the score\’s late-Romantic richness. 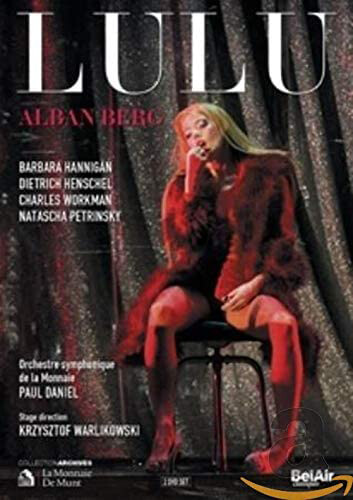