To be young, good-looking and the owner of a fabulous bass voice is a cruel twist of fate. Composers have rarely favoured low voices for their heroes and lovers. Fresh-faced basses, no matter how beautiful their tone, are cast as old men, priests and villains while their tenor cousins get the girls and the glory. In the case of the 34-year-old Russian bass Ildar Abdrazakov it is a terrible waste of heroic material. In life, if not on stage, however, he has wooed, and won, a leading lady—he has for nine years been married to the magnificent Russian mezzo-soprano Olga Borodina. Unlike Gheorghiu and Alagna, their romance is rarely played out on the opera stage, although wherever possible, for the sake of their children, they take roles in the same production: he has sung Escamillo to her Carmen and they’ve been in a couple of Rossini operas, L’italiana in Algeri and La Cenerentola.

The Met is a favourite house for both singers, and Abdrazakov has two engagements there in 2011-12: he sings Enrico in a new production by David McVicar of Anna Bolena, which opens the season this month, and in February both husband and wife sing in Khovanshchina, Borodina as Marfa and Abdrazakov as the rebel priest Dosifey. It’s not only a role debut for Abdrazakov—‘I’ve never sung Russian music outside Russia before. And even at the Maryinsky I sang only a small part in Sadko’. Covent Garden audiences might also have caught him in a concert performance of The Snow Maiden during a Gergiev visit in June 2000. Does he have something against Russian music, or did he fall out with Gergiev at some stage in his career? ‘Not at all,’ says Abdrazakov. ‘My voice suits the Italian repertoire. At an early stage I won the Maria Callas competition and I was offered roles at La Scala, so I have worked in Italy a lot. And there are plenty of Russian basses with the right voices working in St Petersburg and Moscow.’

Abdrazakov’s voice is certainly not a sepulchral, chesty, Russian-Orthodox bass. It has a sweet-toned, lyric sheen that is ideal for the bel canto repertoire, but he can summon up the rougher, darker timbre necessary for the nastier characters in the bass spectrum. He channelled his Tatar ancestors to sing the warrior Attila with Muti at the Met (in a less-than-successful production by Pierre Audi with costumes by Prada and sets by the architects Herzog and de Meuron). Like all basses, Abdrazakov gets the devils (Berlioz’s, Boito’s and Gounod’s) and the priests (the scheming Raimondo in Lucia di Lammermoor). But he’s itching for someone to write a leading role for a dashing young bass. He imagines Henry VIII, a powerful but not usually a glamorous role, as a bit of a Don Giovanni, particularly in his wooing of Jane Seymour. ‘He’s an egoist. He loves himself, he loves the good life and he loves to party. And he wants to find a woman who can give him that son. I understand that.’ Abdrazakov is finding the preparation for this new role satisfying. ‘It’s my music—Donizetti is my composer! It’s just a shame that there is no big aria, just duets and ensembles, although it is a big role.’

Anna Bolena stars Anna Netrebko, so it will be like old times for the two Russians. ‘My first Nozze di Figaro at the Maryinsky in 1998 was with her, with Gianandrea Noseda conducting. We must have done 25 performances at least. And Don Giovanni and Lucia di Lammermoor.’ The traditional approach the Met usually favours should please him, after his previous experience in Jürgen Flimm’s Moïse et Pharaon in Salzburg. As for Attila, ‘It was Maestro Muti’s first time at the Met, and it was this horrible production.’ If the Bolena marketing photos are accurate, the Holbein-inspired costumes, by Jenny Tiramano, will present Abdrazakov as the dashing, cleft-chinned hero that the stocky, piggy-eyed Henry would have loved to have been.

I met Abdrazakov at Covent Garden earlier this year during the revival of Il barbiere di Siviglia in which he was such a compellingly funny and physical Don Basilio. In conversation, he was relaxed and affable: his English wasn’t quite idiomatic enough to crack jokes, but he laughed a lot and heartily. As Basilio he used his big frame to comic effect, making his black-sleeved arms look freakishly long and rubbery. I beg to differ from John Allison, who wrote (in the Sunday Telegraph) that ‘while displaying a ripely booming bass, he mugged the part broadly’. His calumny aria was a joy to behold, its insinuating lines delivered with relish and musicality. Dr Bartolo was the veteran Italian Bruno Praticò, who taught him a lot about commedia dell’arte style 11 years earlier when they were in a production in Verona together. ‘And now I’m here with Bruno, in a different production, which is also very nice. Apart from Verdi’s Requiem, which I sang here in 2009 with Antonio Pappano, this is my first time at Covent Garden and I’m proud to be here.’ Did he enjoy the chance to make an audience laugh? ‘Yes, very much! I play Mustafà in L’italiana in Algeri, Selim in Turco in Italia— it’s so nice to be playing these comic roles.’ It does make a change from the villains and the devils. ‘Oh, my god, yes. So many roles for basses are so serious.’

Abdrazakov sang his first Don Basilio in Russian, in his home city of Ufa in the Russian federal republic of Bashkortostan. Ufa is also famous as the birthplace of Rudolf Nureyev, and Shalyapin is said to have performed in Ufa’s opera house. Abdrazakov’s acting talents were sparked by visits to the film studios where his father directed movies and TV dramas. At the age of five he remembers taking it for granted that he’d be doing it too, as either an actor or a director. His musical flame was almost extinguished by piano teachers at his first specialist music school, who failed to inspire him. ‘But I had a good ear. I could always pick out the accompaniment when my father played the violin.’ The family loved to sing traditional Bashkir songs and Abdrazakov has been known to end his recitals with one of these beautiful melismatic, almost Sufi-like songs. His brother Askar, seven years older, was already training to be a singer and Ildar used to go along to concerts and operas to see him perform. ‘I started going to the same singing teacher and it was clear that I had a voice, like my brother.’ Both basses are now on the international circuit, and on rare occasions they perform together—in 2007 Ildar sang Don Giovanni to his elder brother’s Leporello for Washington Opera. 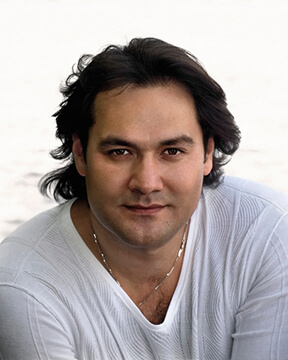