One night in the mid 1990s, the regulars at Manhattan’s Caffé Taci—a restaurant featuring classical singing—were joined by a handsome young baritone who delivered a sterling account of Aleko’s aria. Taci singers hold to a high standard (several veterans appear at leading American and European theatres) but this baritone’s energy and terrific instrument were clearly something special. Still, one was pleasantly surprised to see the same singer not long afterwards come onstage in the almost imperceptible role of Kuligin in the Metropolitan Opera’s Katya Kabanova: Mariusz Kwiecien, in his first assignment as a member of the company’s Lindemann Young Artists programme. ‘Yes,’ laughs Kwiecien, speaking at the Met in October after a full day of rehearsals for Michael Grandage’s new staging of Don Giovanni, ‘after a few drinks, of course, every blockade was open; one just got up and sang.’

Kwiecien’s journey to the top of his profession has been remarkably rapid and assured for a young man from Kraków who arrived in New York at the age of 23. From the start, he worked with international colleagues (that 1999 Katya involved Charles Mackerras, Catherine Malfitano, Katarina Karnéus, Judith Forst and Eva Randová). He sang small and supporting roles under James Levine, Valery Gergiev, Julius Rudel and Dennis Russell Davies. He has since graced many leading operatic capitals (including Milan, Paris, London, Berlin, Munich, Moscow, Madrid, Tokyo, Houston, Chicago and San Francisco), working with conductors including Colin Davis, Antonio Pappano, Vladimir Jurowski, Yannick Nézet-Séguin, Fabio Luisi, Kent Nagano and Edward Gardner. Almost alone among singers I’ve interviewed, Kwiecien ventured not a word (even off the record) against any baton-wielder: ‘I have always had good, helpful conductors; I’ve never had problems.’

The new production promised Kwiecien’s first Met Giovanni, but he has sung the role in many stagings—around 20, he estimates, demanding many varying interpretative strategies. Still, helming a high-profile new Met Don Giovanni production carries with it a certain weight, and the cachet of being an established star: those who have done so in the last century or so include Antonio Scotti (1909), Ezio Pinza (1929), Cesare Siepi (1957), Samuel Ramey (1990) and Thomas Hampson (2004). Hearing that list brought him a happy laugh. Did he have any idea back in his Kuligin days that such a thing might come to pass? ‘Well, yes, actually. I didn’t come to this great theatre to sing Kuligin or Marullo, but to work very hard to sing great parts like Almaviva and Don Giovanni. So this is what I always hoped for.’ He has sung the Vienna version that ends with Giovanni’s death, and didn’t like it: ‘I felt (even being offstage) you need the sextet—which is such beautiful music—to calm down and get back to normal.’ He stresses the multiplicity of ways in which Giovanni’s character can be approached as part of why he finds the part so centrally fascinating. His commitment is absolute. (Sadly, at the new production’s dress rehearsal a high leap from a wall injured his back, and he had to yield the opening performances to Peter Mattei; Kwiecien returned to the stage on October 25 after emergency surgery.) He was also looking forward to working again with the conductor Fabio Luisi. ‘Luisi is not only a fantastic musician, but most of all he is a great colleague, and making music with him is an adventure. He is conducting Don Giovanni here in New York for the first time in his life and we are discovering together in this well-known music many great new things. In the Bohème performances during the Met’s Japan tour we had real fun.’ It’s the sort of working environment that allows Kwiecien freedom in his appoggiature and ornaments. ‘The ornamentation comes naturally. If I want to add some extra notes to what  Mozart wrote, I simply do it. And if a conductor doesn\’t like it, we discuss that during the rehearsals. I also like the new ideas that come from the music staff—so for me it is never a problem to add or eliminate ornaments from what I proposed at the beginning.’

One opera-house director who sensed a rising star early on was Seattle Opera’s perspicacious Speight Jenkins, who first hired Kwiecien for Malatesta in a 2003 Don Pasquale. Kwiecien’s live-wire characterization and vocal excellence dominated the reviews; in subsequent seasons he has returned for Giovanni (2007), Puritani’s Riccardo opposite Lawrence Brownlee (2008), and Count Almaviva (2009). ‘Mariusz is the best in the world in these roles: an enormous talent and a complete performer,’ Jenkins avers. ‘He’s dedicated and serious. Offstage he seems casual and hip—which he is—but he’s intensely professional, eager to work with conductors and directors. It shows in everything he gives on stage: never less than 100 per cent. No one today comes close to what Mariusz can do as Giovanni. He’s completely honest to the text and music, can suggest both sensuality and a mean streak. He gets the dramma giocoso part absolutely.’ There was to have been a fifth Seattle appearance last summer, when for financial reasons Jenkins regretfully cancelled a Tannhäuser that would have featured Kwiecien’s first—presumably only—Wagnerian role, Wolfram. ‘He has that introspection; he’ll be the most interesting Wolfram anyone’s ever seen!’ Speaking of the cancellation, Kwiecien jokes, ‘I got a paid vacation at home thanks to Speight, but I would have loved to do it.’ He misses Seattle, which like Santa Fe he loves both for the supportive opera company and for its nature-encircled beauty. Jenkins hopes that Kwiecien keeps Giovanni and Almaviva central to his repertory and plans to be in Munich for his initial foray into Verdi: Posa, in an imposing cast including Jonas Kaufmann, René Pape and Anja Harteros under Asher Fisch.

Kwiecien, one journalist commented, ‘is very sure about what he doesn’t want to do’. Such roles are numerous. Yeletsky? ‘Boring! There’s nothing for me there. In a decade or so I hope to do Tomsky, who has better stories to tell.’ Andrey in War and Peace? ‘I don’t get anything from the music.’ He is also dubious about taking on French repertory—including Rodrigue in Don Carlos, saying he enjoys Verdi’s work more in Italian (he sings the role in Italian, for the first time, in Munich in January). Not speaking French, he feels hampered in terms of style and character projection. Hamlet is another role he’s been urged to do; an interesting proposition dramatically, but Thomas’s score leaves him indifferent. Valentin? ‘It’s a little too high—plus there are many others who can sing it better, so why should I go there?’ One exception he’ll make to avoiding French parts is Zurga in Les Pêcheurs de perles: ‘There’s the beautiful duet, which everyone waits to hear, but much other fine music including his aria, which has some drama.’ But Kwiecien acknowledges that Bizet’s more famous Escamillo—which the Met gave him in Richard Eyre’s 2009 new production with Elîna Garanèa—was not a good fit. ‘You come on, with no warm-up, sing an aria which everybody knows and which really suits a bass-baritone much better, and there are hundreds of people onstage drawing focus from you. It was not for me.’ The best memory he has of the Carmen experience was his one joint outing with Kaufmann’s José: ‘Just an amazing performance in every way’. 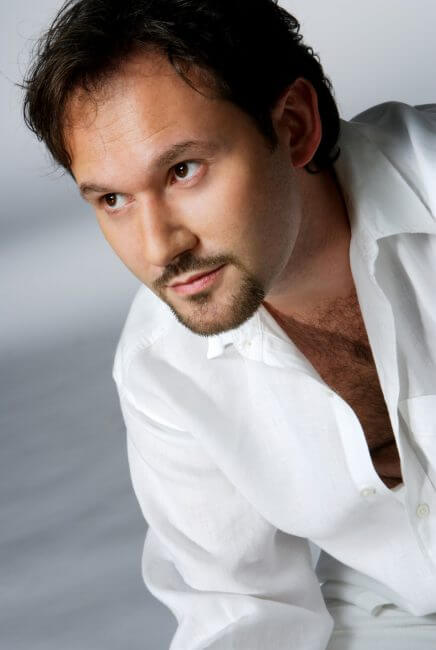