My wife\’s first Lucia was Sutherland, mine was Sills. So you can imagine our astonishment at being left breathless by seattle opera\’s new Bride of Lammermoor, Aleksandra Kurzak (October 20). Like Sutherland, Donizetti\’s coloratura held few terrors for her, and every run and trill had a Sills-like emotional connection and expressivity. At times Kurzak\’s comely physical grace and detailed vocal inflection even evoked memories of the legendary Callas. At times I wished Kurzak would hold back, especially when tackling every possible interpolation, until the last E flat sounded more exhausted than ecstatic. But you can argue that Lucia in her delirium is also at energy\’s end, and I am loath to quibble at Kurzak\’s mesmerizing portrayal.

William Burden\’s Edgardo matched his Lucia in fluid tone and dashing good looks, Deborah Trout\’s luscious Victorian costume design of tousled shirt and velvet waistcoat giving him a Swinburne-esque air. At times Burden\’s top sounded edgy, and Kurzak sensibly took his F in alt at the end of the duet. But overall Burden\’s Edgardo was, in tenor and tone, every Romantic\’s dream. It was also a pleasure to have Raimondo\’s traditionally cut scena with Lucia reinstated, especially when sung with such warmth and compassion as by Arthur Woodley. However, once again the important Wolf\’s Crag scene was missing. (When will producers realize that an uncut Lucia is an uncommonly cohesive drama?) Yet considering Ljubomir Puskaric\’s stiff and prosaic Enrico, avoiding the Crag could be deemed a wise choice.

Indeed, the conductor Bruno Cinquegrani\’s edition was a curious mixture of traditional snippets-stretti, the Wolf\’s Crag-and welcome restorations of infrequently performed recitatives and orchestral felicities. (No glass harmonica, alas.) Cinquegrani knitted it all together sensitively, allowing his singers just enough bel canto leeway to shape their phrases artfully. Robert A. Dahlstrom also had a jigsaw puzzle on his hands, refitting the disorienting Piranesian jumble of catwalks of his older I Puritani set to reflect Lucia\’s darker tint. His elegant solution was a simpler arrangement of the multiple staircases, which accented them with an imposing leaded-glass window and a series of translucent tapestries for spectral materializations.

These ghostly moments were central to the producer Tomer Zvulun\’s concept. Lucia\’s terrifying obsession with the bloodied bride was made manifest as a scarlet-spattered extra wafting mysteriously at the periphery. Then, after her descent into madness, murder and death, Lucia assumed the spirit\’s place as the tragic genius loci. This made her post-humous visitation to Edgardo\’s suicide deeply poignant. Occasionally Zvulun struggled to fit all the pieces together, especially when juxtaposing realistic confrontations with hoary grand-opera swagger. Yet it was his work with Kurzak in the Mad Scene-every run, trill, abrupt shift and subito piano underlined with chilling detail-that silenced criticism … and the audience itself. It was as if the heady days of the Bel Canto Revival, with Sills, Sutherland and Callas, were back again, eerie and unforgettable. 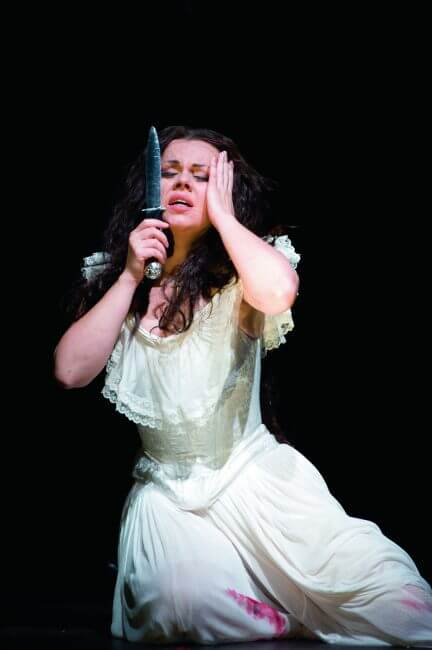