In the first of a series of Beethoven-inspired articles, John Allison finds parallels between the composer and Goya.

‘Gott! Welch’ dunkel hier!’ Beethoven’s depiction of Florestan’s prison cell at the start of Act 2 in Fidelio is one of the great scenes in opera, manifestly full of personal feeling. The mood of sombre foreboding is inimitably Beethovenian, and his orchestration paints a picture of prevailing gloom, relieved by only occasional shafts of light. In the operatic prison scenes of later composers—from Verdi in I due Foscari to Dallapiccola in Il prigioniero—the long, dark shadows of Beethoven’s masterpiece are felt. So much attention is rightly paid to Beethoven’s political idealism that it is easy to overlook how the composer, isolated and increasingly deaf, was by this time incarcerated in a sort of prison of the self.

In parallel, at the other end of Europe, Goya had already painted and drawn his famous prison scenes, of which his biographer Robert Hughes has written: ‘There is little reason to doubt that this vision of immurement, in a place whose walls are too thick for outside sound to penetrate and the only voices are the fitful utterances of prisoners, served Goya as a metaphor for his deafness.’ On the surface, deafness might appear to affect a composer and an artist differently (in his last years, Goya was also afflicted by failing eyesight), but both Beethoven and Goya were victims of the contemporary view that deafness was a condition pathologically related to the mind. Both experienced the effects of alienation from society, and perhaps Goya also felt that it gave him artistic licence for his caprichos. Many of his viewers believed he was touched by madness, and to Viennese observers, Beethoven’s unkempt appearance—to say nothing of his most radical music—created a similar impression. Undoubtedly, isolation fuelled the creative fires of Beethoven and Goya in their greatest and most original works.

If there is nothing remarkable about Beethoven and Goya having both been viewed as short and irascible, Beethoven’s personal appearance is not irrelevant here. Neighbours in Vienna knew him as ‘The Spaniard’, and one probable source of his dark complexion was that his maternal grandmother, María Josefa Poll, appears to have been from Spain herself or at least the child of a family who had migrated north during the War of the Spanish Succession (1701-14). A century later, Beethoven certainly showed intense and consistent interest in news coming from the south, where Spain was bearing the brunt of the Napoleonic Wars, and was reportedly ecstatic about Napoleon’s defeat in Spain in 1814. That was the year that also saw the premiere of the final version of Fidelio, whose setting is ‘A Spanish prison not far from Seville’, and a special performance of the opera was given a few months later for the heads of state assembled at the Congress of Vienna. Even this heralding of the modern political age did not distract Beethoven from his personal affinities, which were surely behind his decision in 1816 to send his nephew Karl to a Spanish school in Vienna set up by Cayetano Anastasio del Río (whose two daughters also had a role in Beethoven’s life).

Two creative geniuses of the stature of Beethoven and Goya cannot be neatly summarized, and indeed the danger of setting these two subjects next to each other is that they will be reduced or oversimplified. But several other parallels between composer and artist are striking enough to be worth noting, yet have rarely been commented on. Consider the facts of their lives. Beethoven died in 1827, a year before Goya, and both spent their final years producing dark works of a spareness never ventured before. The legacy of these works is such—scarcely any composer or artist who followed was unaffected by them—that Beethoven and Goya can be claimed as the inventors of modern music and art. The late quartets and the ‘black paintings’ each conjured up sounds and images that had not been experienced before and have not been equalled since. And for all their engagement with the Napoleonic upheavals in their different parts of Europe, both figures had a lighter—even sardonic—side, and both began their creative lives working within Classical conventions. Not unimportantly, neither was the sort able to produce—like Mozart or Picasso—an ‘instant’ masterpiece: both tended to sketch copiously before producing significant works.

Francisco de Goya y Lucientes was born in 1746 (24 years before Ludwig van Beethoven) in Zaragoza, then the second city of Spain and perhaps a less provincial town than Beethoven’s birthplace, Bonn. But both figures were quick to gravitate towards their cultural capitals, Madrid and Vienna. Artistic patronage throughout Europe in the late 18th century was still in the hands of the church and court, and though Beethoven was one of the first essentially ‘freelance’ composers (Mozart had led the way by getting himself literally kicked out of the Archbishop of Salzburg’s service), his father and grandfather had both been musicians at the Electoral court and chapel in Bonn. Goya himself would eventually break free of these bonds, but he began by producing religious images in Zaragoza and served with distinction at the royal palace in Madrid. The brilliant yet restrained portraits he painted here could almost be described as ‘Haydnesque’, a term that serves as well as any (and, consequently, is overused) in discussion of Beethoven’s early works.

The issue of Goya’s political loyalties is a tricky one, and his personal views remain unknown. Throughout the 1770s and ’80s the artist managed to combine a post at court with friendships with the liberal intellectual set. Though sympathetic to the ideals of the Enlightenment, he was not greatly stirred by revolutionary events in France. During the French occupation of 1808 to 1813, he seemed content to accept commissions from the French authorities. In 1813, an almost complete equestrian portrait of Joseph Bonaparte, Napoleon’s brother and short-term King of Spain, was altered to reflect the face of the liberator, the Duke of Wellington—an anecdote that does not quite equal the banal fervour of Beethoven’s Wellington’s Victory or the famous story from a decade earlier of how, in a rage, the disillusioned composer had torn his dedication to Napoleon from the score of the ‘Eroica’ Symphony.

One may perhaps draw parallels with the celebrated paintings of the Second of May 1808 and Third of May 1808. Apparently patriotic, they show the beginnings of armed resistance to the French, with the ordinary people pitted against Napoleon’s mercenary soldiers. Yet they were painted in 1814, not in protest against the French but under a restored regime. During the occupation, however, Goya had been working in his studio, producing among other things the group of etchings today known as The Disasters of War. Though not fervently patriotic, they convey a horrified fascination with the misery and pain of war. Add to the equation those powerful pictures of prison cells and it is surely clear that few artists have come closer than Goya to matching the hymn to liberty that Beethoven produced in Fidelio. The ‘black paintings’ that adorned the walls of the house to which Goya ‘retired’ show a bleakness and pessimism that—like Beethoven’s equally ‘spiritual’ late works—anticipate the expressionism that was still almost a century off. Though neither was conventionally loyal to the church, both created works of immense spirituality that can only be described as exercises in reconciliation. Both artists were driven by a raging humanity, and both are rare in any era or medium of Western art for the way in which their genius remained undimmed throughout their late years. 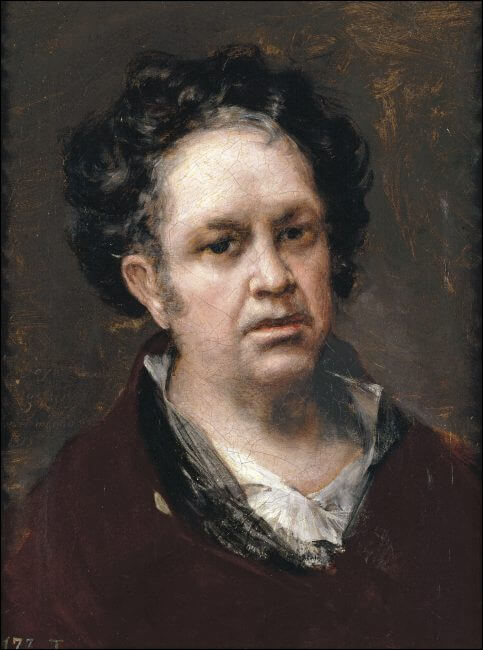