The Death of Italian Opera

Carlos del Cueto explores the end of a musical era

The history of Italian opera is typically drawn as a continuously developing artistic tradition lasting some 300 years, from the early 17th century to Puccini’s Turandot, first performed in 1926. This view was reiterated in last year’s BBC TV series ‘Opera Italia’, and on the whole seems uncontentious enough; however, my doctoral research has led me to become increasingly uncomfortable with its ending. Through the first half of the 19th century the tradition is clear enough: from Rossini through Bellini and Donizetti to Verdi. But the final familiar step—from Verdi to Puccini—is not so straightforward. Operatic histories tend to reach Verdi and then quickly gloss over the intriguing period between 1860 to 1890, the year in which Mascagni’s Cavalleria rusticana (and the so-called ‘Verismo’) appeared, shortly followed by the works of Puccini. Perhaps this tendency is unsurprising, since—Verdi excepted—from those 30 years only Ponchielli’s La Gioconda and Boito’s Mefistofele have endured, at the very margins of the mainstream repertoire. Nevertheless, we are still left with something of a historical black hole between Verdi and ‘Verismo’.

If a historical narrative for those 30 years has been awkward, it is the first ten that have been most challenging. Thinking about the 1860s today one would recall Verdi’s Forza del destino (1862) and Don Carlos (1867), although neither was written for Italy, and the latter is thoroughly French. Perhaps Boito’s Mefistofele (1868) would make the list, but in truth it was only the radically revised version of 1875 that gained some popularity. What is still more intriguing is that even at the time the list would have been no easier to compile, as there were no other new Italian operas that achieved success domestically or abroad. In an attempt to understand why this was the case, I focused on operatic culture in Milan during this decade. I certainly did not set out to challenge the narrative of 19th-century opera, but one conclusion has emerged as unavoidable: that in the 1860s the tradition of Italian opera died, and something altogether different began to develop.

It is a striking irony that this compositional crisis should coincide so precisely with the moment that Italy finally became a nation: the process of geo-political unification lasted from July 1859 (when the Austrian Empire ceded Lombardy to France, which in turn ceded it to Piedmont) until October 1870 (when Napoleon III withdrew his troops from the Papal States, leading to their annexation to the Kingdom of Italy). As Italy was being born, its foremost cultural product seemed to wither.

Here one must be cautious, however, for it is tempting to search for a causal connection between these two phenomena. But there is no clear evidence that the crisis in Italian opera was itself a product of Italy’s new political reality. Instead, historical sources suggest that the reasons behind the crisis were related to a broader cultural change, brought about by urbanization, industrialization, the railway, and the rise in economic power of the non-aristocratic classes—larger European-wide processes that resulted in new ways of perceiving a world that moved increasingly quickly.

Italian opera, by contrast, had not changed very much during the first half of the 19th century: listen back-to-back to any random selection of music from operas by Rossini, Bellini, Donizetti, and by Verdi up to about 1849 (La battaglia di Legnano) and the strong similarities are audible enough. Each of these composers has an individual voice, certainly, but there is a clear uniformity of style among them. If one then listens to a selection from Verdi’s Don Carlos and Otello and Boito’s Mefistofele, the difference with the earlier set is striking. Of course, in terms of the Italian tradition as a whole, the differences between Monteverdi, Handel and Donizetti are even more noticeable, but what is different in the pre-1850, post-1860 examples is the short time-span separating these two distinct musical universes. Why, then, have we regarded all of these operas as belonging to the same continuum?

In a sense it is Verdi’s fault. He lived for so long and developed his style so much throughout his career that his oeuvre taken alone shows a gradual transition between the Rossinian style and a later one. Given his importance and popularity, it has been natural to project this idea of a gradual change onto the field of Italian opera as a whole. Without Verdi as a linking presence, however, the idea becomes untenable. Certainly no other composer who wrote in the Rossinian style made such a leap, so it seems problematic that our conception of the history of Italian opera should be so influenced by the anomaly that was Verdi’s career.

An alternate view is offered by a thought-provoking analysis from 1860s Paris, discussed in April 1865 by the Milanese newspaper Il Trovatore under the headline: ‘Italian Opera Dies!’ It contained reflections on the latest Parisian operatic season by the critic A.H. Blaze de Bury, who concluded: ‘The Théâtre-Italien is an institution of the past, which, like many others, will fade. It is dying because it no longer stages for us a genre that is particular to it because, musically, Italy has ceased to produce.’ Blaze de Bury continued: ‘Rossini, Bellini, Donizetti, Verdi—it seems that with each name comes a downward step. With Bellini commenced a new period of decline that through Donizetti has reached Verdi, under whose reign Italian opera decidedly no longer has a raison d’être.’ This was somewhat extreme as an assessment, but by no means alone; it was, in fact, one of many French and Italian articles of the decade airing similar complaints about Italian opera and announcing its demise.

Investigation of the musical life of Milan—home to the prestigious Teatro alla Scala and considered, then as now, the capital of Italian opera—indicates how such a perception could have developed. 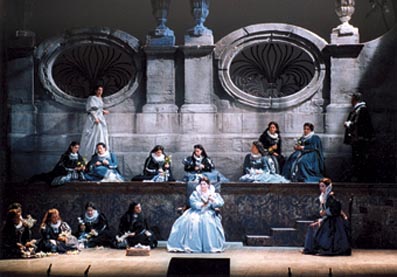