Encapsulating all the creative differences that were soon to terminate the Brecht-Weill collaboration, Aufstieg und Fall der Stadt Mahagonny is a work that positively invites directors and conductors to take different aesthetic sides. No reports of any falling-out between Laurent Pelly and Ilan Volkov leaked from the theatre du capitole in November, but nor did their mostly enjoyable new production suggest any great meeting of minds. In the pit, Volkov enforced the fiercest musical values, mining Weill\’s score for all its sardonic wit while giving the melodies space to sing and the marches room for manoeuvre; more than many conductors in this music, he understands the score\’s neo-Classicism, and even made a virtue of those more arid, Weimar-Republic-of-Counterpoint moments. The Orchestre National du Capitole embraced the music with energetic bite. But it was not until rather late in the show that Pelly seemed to latch onto Brecht\’s politicizing. Of course, there are too many avenues here-social injustice, corruption, moral decadence, ecology and consumerism, to name a few-for a director to explore in one evening, but by treating the ‘issues\’ as decoration Pelly seemed to be saying he was interested mainly in Mahagonny\’s entertainment value. By avoiding anything too serious, this satire lacked a dark underside.

Looking especially imposing with the work\’s French title, the posters for this Grandeur et Décadence de la ville de Mahagonny promised more than Barbara de Limburg\’s designs were able to deliver. Or perhaps just something different. Instead of the poster\’s towering art deco ziggurat, we got an often empty black stage, filled with flashing neon signs that flew in and out-a good way of ensuring cinematic fluidity between the many short scenes. During the prelude, black-and-white film of a police-car chase was projected onto the curtain, which went up to reveal Leocadia Begbick, Fatty and Trinity Moses (no less a trio than Marjana Lipovšek, Chris Merritt and Gregg Baker) clambering out of a rickety old Chevy, Begbick clutching a map and looking lost. This highway off-ramp became the setting for much that followed, and was often filled by Vegas-style showbiz. The last of the Act 1 hotel scenes, for instance, featured a wittily-choreographed swimming pool, with men lying on deckchairs and girls diving in-complete with audible splashes. In the Act 2 gluttony scene, Jack expired after polishing off a production-line\’s worth of hamburgers, each delivered to him by scantily-clad waitresses. Everything in this show seemed to be up in lights-even the electric chair, shaped like a giant M-for-Mahagonny-though towards the end some of the Brechtian slogans were paraded on good, old-fashioned posters. Pelly also acknowledged Brecht by bringing on an actor (the excellent Magne-Håvard Brekke) to narrate in German and (often) French.

Though the cast looked good on paper, it sounded mixed in the theatre at the November 28 matinee-and with Lipovšek, Merritt and Baker it was more a vocal Fall than Rise. The mezzo showed that she has little voice left; though they were vocally patchy, her accomplices still managed to deliver big performances. Even in this intimate theatre, Valentina Farcas\’s lively Jenny sounded surprisingly small-voiced, but then most of the girls seemed to have been cast less for their larynxes than for their legs. The male quartet (Nikolai Schukoff, Roger Padullés, Harry Peeters, Tommi Hakala) blended well, with Hakala\’s Bill singing with special warmth and Schukoff\’s strongly-sung Jim delivering the most committed performance on stage. 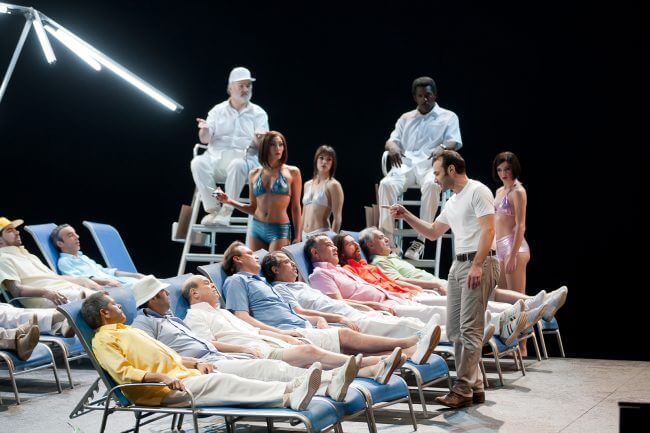