Angela Gheorghiu was previously profiled in the March 1999 issue of opera, and at that time her now legendary appearance as Violetta at the Royal Opera House was still a relatively recent wonder—having happened only four and a quarter years earlier. Just around the corner was her dazzling recording of Massenet’s Manon, in which she would be acclaimed for her remarkable fidelity to the composer’s copious instructions for sudden changes of tempo, phrasing and vocal character to convey Manon’s extreme emotional instability, as well as her enchanting, capricious allure. And following hard on the heels of that, in 2000 she displayed her mastery of a completely different vocal style and dramatic personality when she took the title role of Tosca in a film directed by Benoît Jacquot (available on an Opus Arte DVD). It has been particularly striking to see how vividly she has brought the persona of Tosca to life in her creative collaborations with directors who have made markedly differing productions of this opera, as shown by comparisons between the Jacquot film and the Jonathan Kent staging first seen at Covent Garden in June 2006. Five years on (and following a revival in 2009) Gheorghiu once more sings Tosca in the Kent production at Covent Garden this month, and she has some probing observations on her role.

‘Puccini, like Verdi, was a genius in the subtle way he could make a voice change its characteristics as the course of events in the drama affects the personality of the role. In Tosca, the textures and colours of the vocal and orchestral writing when Tosca sings in the first-act duet with Cavaradossi convey such a girlish quality in her. There is a freshness and sweetness in the lines, they are almost innocent-sounding, even though of course she knows how to entrance her man, and she knows what it is to feel jealous. There is a youthful delicacy in her in this duet, and Puccini gives the soprano a great challenge to convey this and then follow it with such a dramatic difference later when she becomes distressed and we see how strong she is as she fights so hard to protect Cavaradossi.

‘By the second act she is like a different soprano. And now when she has to face Scarpia in this act, I feel particularly familiar with what she is experiencing, because I have been in her situation in a way. Like her, I am an opera singer, and even though she was living in Rome in 1800, some of her moments with Scarpia remind me of how it was with the Securitate secret police in Romania when I lived there in the days of the Ceauºescu regime. You were forced to say something that they wanted, either to save your own life or someone else’s life. They were extremely intimidating. And so for me it is absolutely natural that when Tosca has been made almost desperate by all Scarpia’s threats, she sings “Vissi d’arte”. 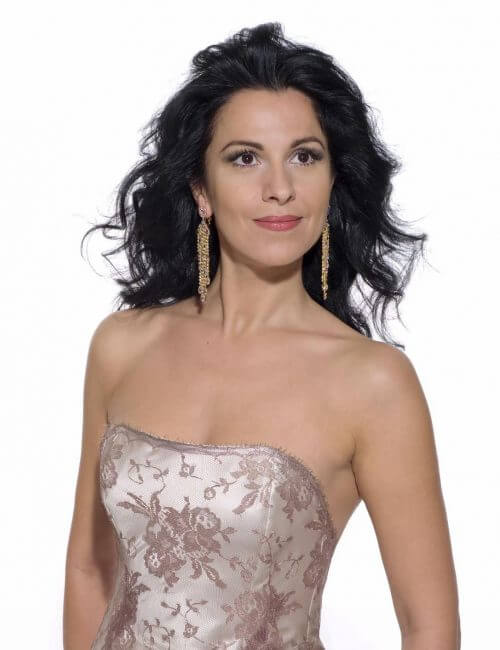