Julietta or Juliette? The discovery in 2003 of a French version of Bohuslav Martinů\’s masterpiece-the work of the composer on his deathbed-was further evidence of how the opera had haunted him throughout the 21 years that separated its premiere in Prague in 1938 and his death in Swiss exile. Not that there could ever have been any doubt, for motifs from the opera resonate at key moments throughout his subsequent oeuvre, and in the words of the Martinů scholar Aleš Březina, ‘It is obvious that the composer cared more about this opera than about any other of his more than 400 works\’. The French version, chosen for the opernhaus\’s new staging, has its own authenticity, and not simply because Martinů based the opera on George Neveux\’s play Juliette, ou La Clé des songes. The score was written in Paris, where Martinů had lived since 1923 but which he would soon flee for America, and came to be bound up in the mind of the composer-whose personal torments always found outlet in his music-with his passionate and ultimate tragic affair with the young composer Vítězslava Kaprálová.

A fascinating exploration of the role that memory plays in the whole of human existence, the Kafkaesque plot also spoke to the imminent homelessness of a composer whose native Czechoslovakia was soon to be trampled over. But for Martinů and Kaprálová, drawn together as lovers in pre-war Paris and then quickly torn apart amid the disintegration all around them, Juliette was full of poignant meaning (its musical ideas were also absorbed into the works Kaprálová wrote before her death in 1940). It is the story of a dream in which the hapless bookseller anti-hero Michel pursues his ideal woman, Juliette, who is so alluring that he chooses to remain in the dream rather than to return to the real world. Martinů draws the listener into a dream-web of sound, with a score that sometimes attains its own trance-like quality and in which the musical ground is constantly shifting-achieved not least through what have long been known as the ‘Julietta chords\’, a distinctively altered and enriched plagal cadence that punctuates the music. The orchestration may be a fascinating synthesis of Parisian ambience and Czech astringency-and the work could be described as a cross between Pelléas et Mélisande and The Makropoulos Case-but one of its most remarkable aspects is the use of a distant solo piano at key moments, for instance prefacing Juliette\’s first entry and accompanying the elderly couple buying memories from the souvenir vendor who invents details of a past they cannot remember. All the threads of the score were beautifully and compellingly drawn together in Zurich by Fabio Luisi, the house\’s Generalmusikdirektor, who conducted with punchy muscularity and dramatic drive while savouring every colour.

The stageworthiness of Juliette is well known-in the UK thanks to Anthony Besch\’s first British staging (1978) and more recent productions by David Pountney and Richard Jones-and it is attracting more and more attention; high-profile productions are due in the coming year in Frankfurt, Berlin and Prague. The opera is a gift to directors for the way in which surrealism meets symbolism on every level, with nothing ever being quite what it seems. In his new staging, Zurich\’s Intendant, Andreas Homoki, paid this work the compliment of giving it all the house\’s resources, but occasionally less might have been more, not least when it came to over-use of the revolve. The set turned, unnecessarily, to match every new scene in the score, however short, and by the end the effect was both dizzying and a little wearisome-making the final act especially seem overlong, which is surely not the case. Homoki also plunged everyone into surreal fantasy right from the start, rather than letting it take hold slowly, but he did capture the way in which black comedy turns to tragedy, and in Christian Schmidt\’s designs everything looked very striking.

Lavish 1930s costumes set the action at the time of composition, and the stage was brightly lit to suggest a southern ambience to the seaside village where Michel goes in search of Juliette. On that revolve, two basic settings dominated the stage action, but with variation: a handsome, book-lined room (library or bookshop, nodding towards Michel\’s trade) and a sunbaked facade opening onto an alleyway. In one of the strongest visual coups, all those bookshelves were emptied for Act 3 and its Central Office of Dreams, and other lines between dream and reality were blurred to intriguing effect: the trees from the Act 2 forest that found their way indoors, the ocean liner\’s bow protruding into the room of books, and the way in which an almost life-sized steam locomotive chugged on to make sense of (or further confuse) the references to the railway (or lack thereof) in the libretto, also echoed in the score.

On February 27 Annette Dasch lent lustrous voice to the title role, projecting her medium-sized soprano with clarity and pleasingly burnished tone. Her simple red dress (and red scarf, dangled Mélisande-like from the balcony) made her stand out amid the sober colours that dominated the stage. But the biggest role is Michel, taken here with tenorial sweetness and heft by Joseph Kaiser in an ardent performance that made one feel more strongly than ever how this poor, lovestruck man suffers. In their multiple roles, the elegant tenor Airam Hernandez stood out especially for his sardonic Commissar in the Central Office of Dreams, and Alex Lawrence brought a firm baritone to the Memory Dealer. Lin Shi supplied smooth, warm tone in the trouser role of the Young Arab (and Young Sailor), and a knife-wielding Pavel Daniluk sang the Old Arab (also Old Sailor) with dark, big-voiced focus. The Birdseller and Fishmonger were vividly played by Rebecca Olvera and Judit Kutasi, and Reinhard Mayr (Old Man) and Irène Friedli (Old Woman) were touchingly made up to look like aged versions of Juliette and Michel-adding another layer to be grasped (or not) in what is truly an ‘opera of dreams\’. 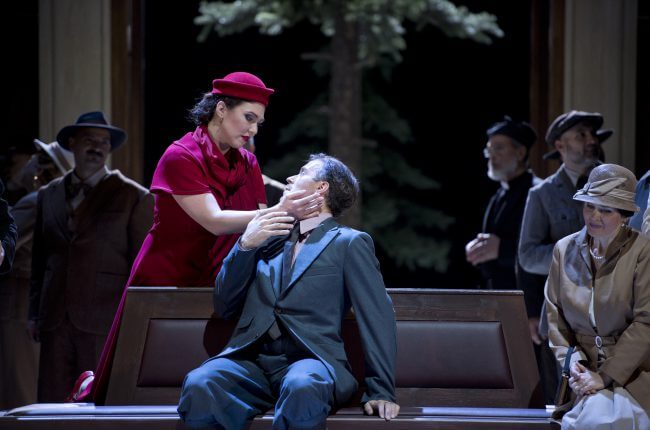