As a magazine never afraid to draw attention to the elephant in the room, this month we have actually put one on the cover — showing Graham Vick’s new staging of Le nozze di Figaro at Opera di Roma, a production reviewed inside by our veteran Rome correspondent, Luigi Bellingardi. Also from Italy this month we cover the opening of La Scala’s new season with the new production by Davide Livermore of Attila , conducted by Riccardo Chailly. Other new productions reviewed in this issue include Hänsel und Gretel at Covent Garden, Teseo in Vienna, the premiere of Rufus Wainright’s Hadrian in Toronto, Simon Boccanegra in Paris, Götterdämmerung in Düsseldorf, Lohenrgin in Stuttgart, Candide in Bergen, Faust in Pretoria, the premiere of Jonas Bohlin’s Tristessa in Stockholm, the premiere of Tod Machover’s Schoenberg in Hollywood in Boston, Siegfried in Chicago and La traviata at the New York Met — featuring Juan Diego Flórez’s first Alfredo.

This month we profile the exciting American tenor René Barbera, who with his distinctive Latin tone is making waves in the bel canto world. We also hear from Laurent Brunner, who as director of Versailles Spectacles has one of the world’s best arts administration jobs, and we consider the complicated process of publishing new operas. In ‘For the record …’, the fasting-rising mezzo Wallis Giunta, currently singing Carmen in Leipzig, chooses Teresa Berganza’s classic DG recording of Carmen .

Staying true to that elephant, the editorial highlights a looming issue for British — and possibly international — opera houses. As if next month won’t already be challenging enough for the arts, with the woolly mammoth of Brexit threatening to disrupt things, March is also expected to see developments in the legal case between the Royal Opera House and one of its former orchestral musicians who suffered a life-changing hearing injury — the outcome of which could affect the way theatres are compelled to work.

Our Disc of the Month is Rumi , by the Iranian composer Behzad Abdi, released on Naxos. 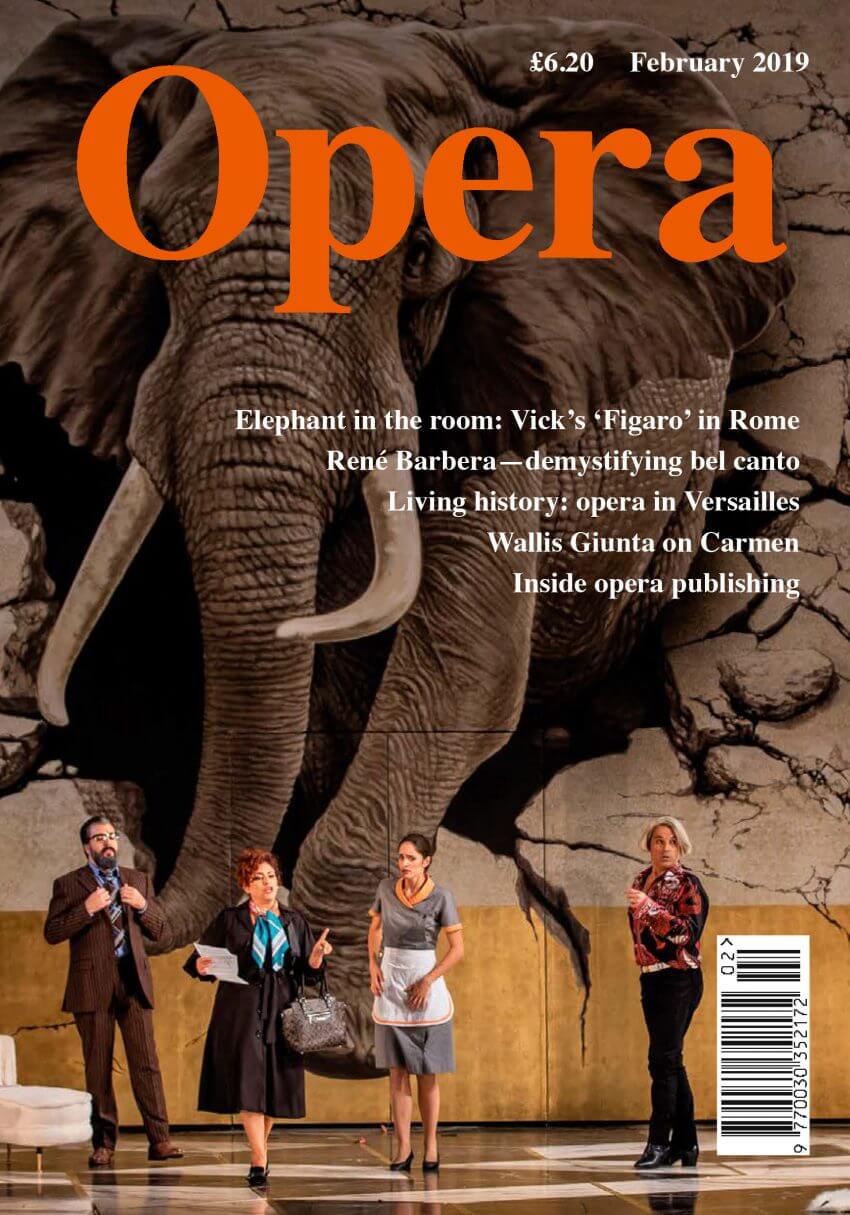